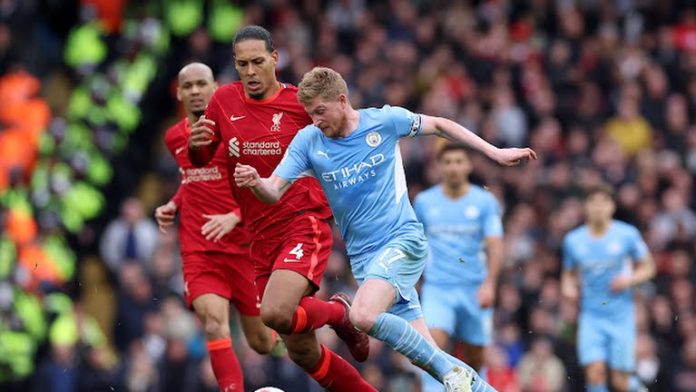 There is no change at the top of the Premier League table after Manchester City and Liverpool played out a breathtaking classic at the Etihad on Sunday evening.

Kevin De Bruyne gave the hosts the lead after just five minutes when his strike from the edge of the area took a big deflection off Joël Matip and beat Alisson via the post but that lead lasted just eight minutes before Trent Alexander-Arnold cut back for Diogo Jota and his low effort squirmed beyond Ederson to equalise.

The Brazilian then almost beat himself in bizarre fashion when he lost balance with the ball at his feet in the six-yard box and had to make a last gasp recovery to clear the ball off his line.

It was his compatriot Gabriel Jesus who did net the third goal of the game though when he ghosted in at the back post and steered a João Cancelo delivery in off the underside of the crossbar.

The second half started in a similar intense fashion as after just 46 seconds, Mo Salah picked out Sadio Mané with a perfect through ball and he calmly planted the ball beyond Ederson to level again.

On the hour mark, City came close to regaining the lead when after weaving past two challenges in the box, Gabriel Jesus saw his goal-bound effort blocked by Virgil van Dijk and then had a Raheem Sterling strike ruled out for the tightest of offside calls.

In the final minute of normal time, Riyad Mahrez curled a free-kick against the post to end the game of the season in the Premier League so far, meaning City remain a point clear with seven games remaining.