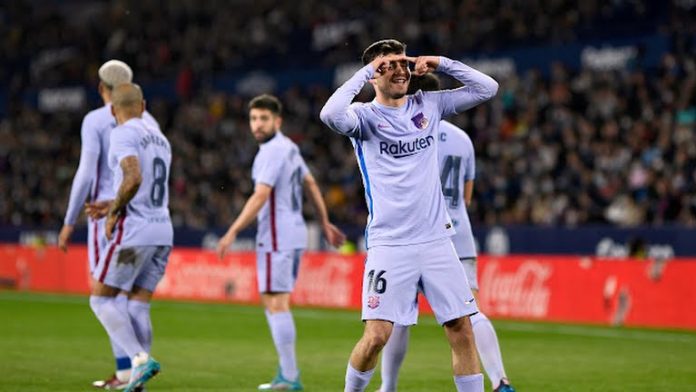 Barcelona beat Levante 3-2 in a thrilling La Liga encounter on Sunday night to return to second place on the La Liga table.

The Catalan club needed a spirited second-half performance to come from behind and beat Levante thanks to a last-minute header by Luuk de Jong.

Bested for much of the first hour of the game, Barcelona found themselves 1-0 just after the break when Levante forward Luis Morales converted a penalty given for a soft foul by Dani Alves.

It could’ve been worse for the visitors as, following his first-half heroics, Marc-André ter Stergen was called into action to save a second penalty not five minutes later.

If there was debate over the first, this one was more clear cut. Morales decided to leave it for his striking partner Roger Martí whose tame effort was well saved.

A much needed wake up call for Barcelona who seized their opportunity. Cutting inside Ousmane Dembélé found Pierre-Emerick Aubmeyang who made no mistake with his header from 5-yards out.

Levante will have been rueing their miss when four minutes later promising youngster Pedri stroked home an effort from the edge of the box following a mazy run by Gavi.

Barcelona’s defensive woes continued as second-half substitute Clément Lenglet gave away what would be the host’s third penalty of the game. Gonzalo Melero stepped up and sent ter Stergen the wrong way to draw the game level at 2-2.

A game of twists and turns had one left as de Jong popped up in added time to head home a Jordi Alba cross, winning the game for Barcelona 3-2.

Barcelona now sit in second place on the La Liga table, level on points with Sevilla but with H2H advantage and a game in hand.