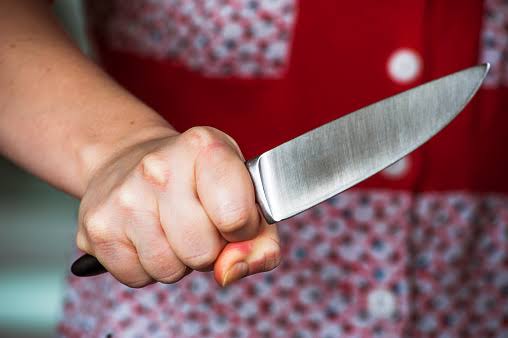 Evidence Eseoghene, a middle-aged woman is on the run after she allegedly scalded her ten-year-old niece, Victory Oghenevo with a hot knife in Abena, Lekki-Ajah axis of Lagos metropolis.

According to residents, Eseoghene who is little Victory’s aunt tortured her for taking N100 from her purse to buy something to eat without permission.

It was gathered that Victory’s agonising screams during the torture drew the attention of the neighbours, who came to the scene to rescue the little girl and rushed her to the Lucent Hospital, Molete, Ajah, Ibeju Lekki.

The aunt sensing trouble from the outraged residents fled and was not seen in her house.

The aunt is an evil incarnate pic.twitter.com/U34RVLQy3m

One of the residents, Fayokemi Sadiq, told AF24NEWS that Eseoghene took to her heels, to escape justice, because the residents, after seeing the burns all over Victory’s body, decided to hand her over to the police.

Fayokemi also took to Twitter to rant about the incident, “… I need you to help me get justice for the girl. Her aunt burnt her with a hot knife all because she took 100naira to buy puff-puff and zobo when she was hungry.”

When AF24news inquired whether the police have been involved, Fayokemi disclosed that an officer attached to the Elemoro Police Station, Inspector Godwin dismissed the case as ‘a family issue’.

Olutekun Ekundayo, the Divisional Police Officer, was unavailable to comment.

Here is a video of Victory, writhing in pain.

The aunt is an evil incarnate pic.twitter.com/U34RVLQy3m