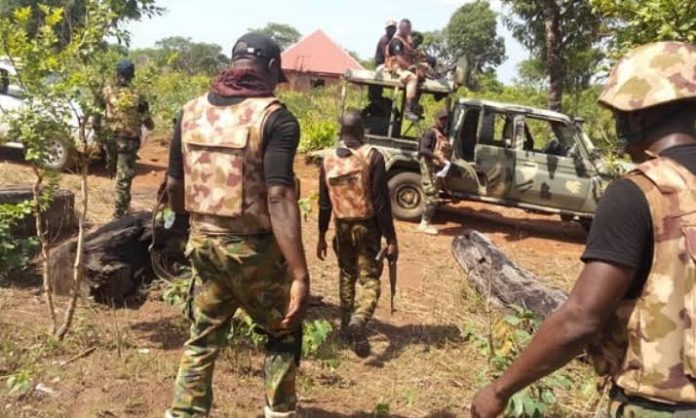 Troops of the Nigerian Army have, for the second night in succession, prevented terrorists from infiltrating Maiduguri, the Borno State capital, days to the end of Ramadan.

The terrorists, suspected to belong to the Islamic State in West Africa Province sect had, on Wednesday night, attempted to infiltrate Maiduguri around 11:50pm from Polo, but troops of the Nigerian Army proactively dispersed them using heavy artillery to launch attack at the terrorists who were sighted in the bush not far from the outskirts.

“The army sighted the terrorists in the bush, they were seen moving in large numbers not far away from the cashew plantation around Polo area and the military fired their artillery at the terrorists.

“Reliable information had it that they (the terrorists) were planning to throw mortal bombs to Maiduguri town. As such when they were sighted, the army immediately dispersed them.

“All the heavy sounds you heard were from the military forces, not a single shot was fired by the terrorists,” a civilian Joint Task Force source has confirmed.

Also, in the early hours of Friday, troops of the Nigerian army inflicted heavy casualties on Boko Haram terrorists when they launched a midnight attack in Gajiram, the Nganzai Local Government Area of Borno State.

The terrorists, believed to be of the ISWAP faction, attacked the town with several gun trucks and motorcycles at about 01:15am.

Information obtained from a military source in Gajiram revealed that the terrorists were overpowered by the Nigerian troops who were supported by the air component of the Operation Hadin Kai.

“Our troops dealt with them decisively. They retreated and escaped through the Gudumbali area. The troops were supported by the Nigerian Air Force.

“Fighter jets were immediately mobilised to provide aerial support to the ground troops, who were already in a fierce gun battle with the terrorists,” the military source noted.

Gajiram is the headquarters of the Nganzai LGA and it is about 73km from Maiduguri, the Borno State capital.