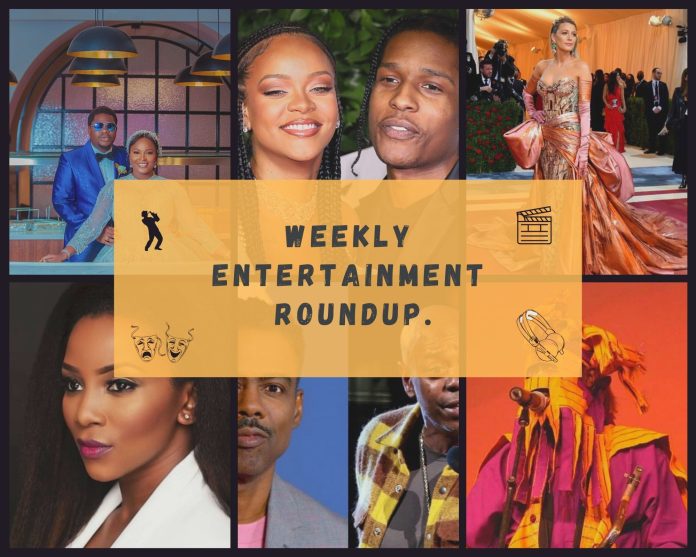 It was another very busy week on the internet, with the Met Gala 2022 jumpstarting the new month of May on Monday morning. Celebrity birthdays were celebrated, music videos were released, rumours swirled, and as usual, social media was buzzing. AF24News has compiled a list of some of the most significant stories in entertainment this week. Feel free to mention any news about your faves that we might have missed.

In the new video for ASAP Rocky’s new song, “D.M.B”, the rapper starred Rihanna, who is currently expecting their new baby, as the lead character.

Around the three-minute mark, the rapper, 33, proposes to the singer, 34, with a grill that reads, “Marry me?” Rihanna — who appears dressed in a red veil — responds with her own grill that says, “I do.”

Toward the end of the video, a group of people can be seen throwing flower petals at the couple, which is reminiscent of when newlyweds walk down the aisle after getting married.

Of course, Twitter army was right on cue, claiming that the pair are engaged.

But the rumours were dispelled, with Rap TV revealing that the music video was nothing beyond art:

JUST IN: A$AP Rocky & Rihanna are reportedly NOT engaged, and the music video was just for fun‼️👀 pic.twitter.com/4Vmytypku8

After a year-long hiatus due to the COVID-19 pandemic, Multichoice kicked off the eighth edition of the Africa Magic Viewers’ Choice Awards (AMVCA) on Saturday in Lagos, Nigeria.

The 8-day event showcases filmmakers, actors, content creators, and media professionals from all over Africa. The festival lays out a unique line-up of activities for the in-person audience program. Activities include panel discussions, interactive sessions for emerging content curators, a runway fashion show, a Pan-African food festival, and in AMVCA fashion, a grand opening and closing ceremony. Nigerian media personality IK Osakioduwa will co-host the show alongside South Africa’s Bonang Matheba.

Pepsi Nigeria also announced that legendary afrobeat artiste Lagbaja and popular singer, Rema, will be at the live grand closing ceremony on Saturday next week (May 14).

Comedian Dave Chappelle was tackled by an individual while onstage at the Hollywood Bowl in Los Angeles on Tuesday night during Netflix’s first-ever live comedy festival.

In circulating footage, Chappelle, 48, and the unidentified individual tussled on the stage floor during the Netflix Is A Joke Fest, before the individual ran away behind a screen on stage. Security personnel then surrounded and tackled the person in the rear corner of the stage.

Footage of the attacker showed him stretchered to the hospital in bent shape. His arm looked to be twisted at an unsettling angle as well.

Aftermath photo of the person who attacked Dave Chappelle 😳 pic.twitter.com/uFtcUwlrnX

Comedian Chris Rock, who performed earlier in the night, also came on stage with Chappelle moments after the attack and joked: “Was that Will Smith?”

Recall that last month at the 94th Academy Awards, actor Will Smith walked on stage and slapped Rock across the face after the comedian made a joke about Smith’s wife, Jada Pinkett Smith, during his presentation for Best Documentary Feature.

Multi-award-winning Nigerian actress, Genevieve Nnaji, clocked 43 on Tuesday, May 3. Genevieve, who has a large, die-hard fanbase, however, decided to have a lowkey celebration. The veteran actress, who has been MIA from social media since March, kept to her reputation of privacy.

Genevieve is a Nigerian actress, producer, and director.

She won the Africa Movie Academy Award for Best Actress in a Leading Role in 2005, making her the first actor to win the award.

Popular Nigerian social media comedian, Debo Adebayo, popularly known as Mr. Macaroni, clocked 29 on Tuesday, May 3. Macaroni shares a birth date with Genevieve. Unlike the actress, however, Debo took to social media to share birthday photos of himself with his followers.

Posting on his Facebook page, he said, “It’s my birthday and I’m so thankful”.

Many fans also took to his social media accounts to wish him a happy birthday.

Macaroni also clarified rumours about the wedding-themed pictures he shared in late March. In the photos, Adebayo posted with ‘Mummy wa’, who always acted as his wife in his skits.

The pictures caused a lot of uncertainties among his fans, who wondered if it was a real wedding, publicity stunt, or promotion for a skit.

He has now said that it was not a real wedding photoshoot.

“Thank you all for your kind messages. 29 feels good! Confession: I’m not married ooo,” he said via social media on Tuesday.

Met Gala, an annual fundraising event fondly referred to as fashion’s biggest night, returned on Monday this week after two years of absence due to Covid.

The evening, themed, “In America: An Anthology of Fashion”, was hosted by Blake Lively, Ryan Reynolds, Lin-Manuel Miranda, and Regina King.

Celebrities were expected to follow the event’s dress code, ‘Gilded Glamour and White Tie’, in reference to late-nineteenth-century New York.

The Gilded Age, a period which spanned 1870 to 1890, was characterised by “unprecedented prosperity, cultural change, and industrialisation” in the city.

Here are some photos from the event: Some of the celebrities present at the event were Singer Alicia Keys, World’s richest man Elon Musk, accompanied by his mother, Maye, and the Kardashian family (who endured some shtick from the polarised social media).

Rihanna was honoured with a statue of herself at the Metropolitan Art Museum in New York.

While she was unable to attend the Met Gala on Monday, the museum paid tribute to the singer at the event held on Monday.

In the montage posted on her official Twitter page, the Umbrella singer’s pregnant figure stood regal alongside other historic statues.

The sculpted image was designed after her cover spread in the Vogue Magazine’s May issue, where she posed with her baby bump in a sheer catsuit and gave an exclusive on her pregnancy journey.

shut down the met in marble! what’s more gilded than that? Lol! Thank you @metmuseum and @voguemagazine for this historic tribute! y’all bad for this one! pic.twitter.com/NawYMd0RpL