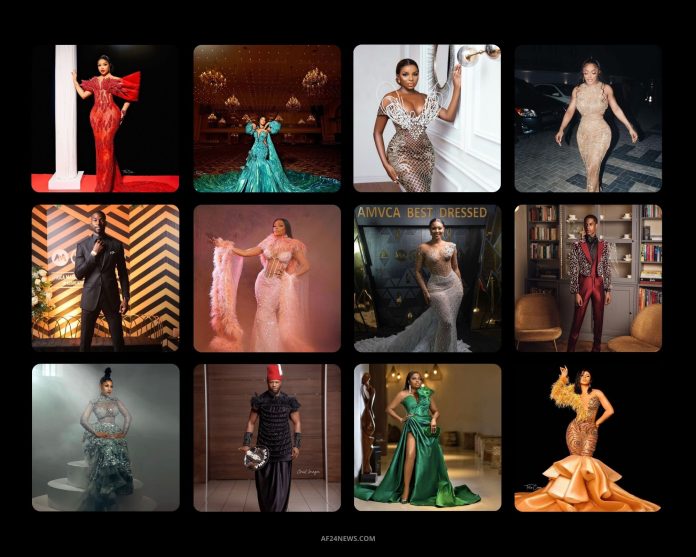 It was all glitz and glamour at the eighth edition of the African Magic Viewers Choice Awards (AMVCA) which held at the Eko Hotel and Suites in Lagos on Saturday.

Retweet if Osas deserves this best dressed at the #AMVCA 🔥🔥 pic.twitter.com/OTlHPKg9NC

The AMVCA red carpet started with John Ugbe, the Chief Executive Officer (CEO) of Multichoice, reading his pre-recorded welcome speech and applauding African filmmakers for continually reinventing themselves while telling the African story.

The show was anchored by radio and television on-air personality IK Osakioduwa and the glamorous South African Bonang Matheba.

The show kicked off with Yemi Alade’s performance of ‘Tambourine’. Osakioduwa poked a joke at actor Deyemi Okanlanwon about the actor surviving during COVID-19. In response, Okanlawon playfully attempted to recreate the Will Smith-Chris Rock Oscars moment.

The Best Supporting Actress in Drama or TV series male and female categories went to Omowunmi Dada for her role in “Country Hard”, while Odunlade Adekola won for his role in “Jankariwo”.

Lagbaja and Rema mounted the stage and reminded the audience why a collaboration between the younger and older generations would always be a hit and experience mixed with energy.

“No do gra gra” and “konko below” classics were performed and had the audience swaying as the nostalgic feeling kept them on their feet. The audience gave a thunderous applause after the performance.

For Best Actress and Actor in Comedy, Funke Akindele-Bello won for her role in “Omoghetto The Saga”, while Samuel Perry, popularly known as Broda Shagi, won the Male category.

The award for best actress in drama movie or tv series was won by Osas Ighodaro for her role in Rattle Snake. Stan Nzeh won in the Male category also for Rattle Snake.

The organisers of the AMVCA took out time to celebrate entertainers who had passed away. They included Karibi Fubara, Babatunde Omodina, Victor Olaotan, Sir Victor Nwaifo, Biglow, Sadiq Daba and Bolaji Rosiji, among others.

Best Talent Factory went to Daisy Masembe, while best-dressed actor and actress at the AMVCA went to Denola Grey and Osas Ighodaro, respectively. They went home with N500,000 each.

Trailblazers award went to a production assistant that grew into a producer, Teniola Aladese. The award was presented by Hollywood actress Tasha Smith.

The Industry Merit Awards, an award given to deserving thespians in the movie industry, was presented to Taiwo Ajayi-Lycett, an octogenarian whose versatility cuts across stage performances and movies.

“I have led an incredible life, and I am grateful for my journey and for those that are before me and those coming after me. God is great, and I’m thankful,” Ajayi-Lycett said.

The award for the Best Director went to Ramsey Nouah for his second attempt at directing in Rattle Snake.

Best Overall film went to Amina, a movie based on Queen Amina, the history of the first woman to rule the Zazzau Empire in the 16th century.

The event ended on an electrifying note with Dapo Oyebanjo, popularly known as D’banj, performing one of his hit tracks, “Ogbona feli feli”.