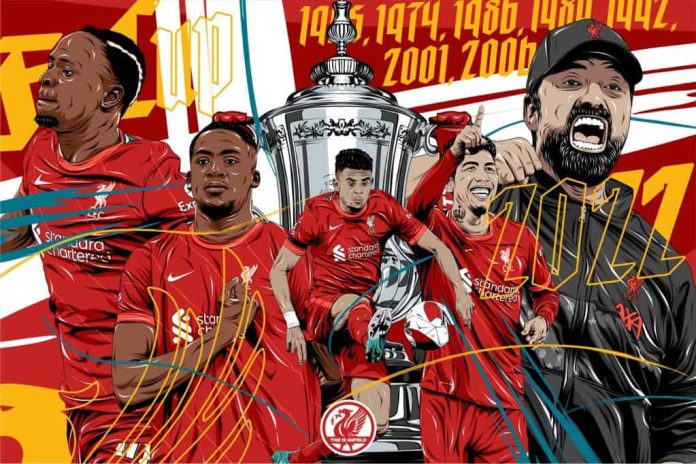 Liverpool beat Chelsea on penalties to win the FA Cup final at Wembley on Saturday after the match finished goalless following extra-time.

The shootout finished 6-5, with Kostas Tsimikas scoring the winning spot-kick after Mason Mount’s effort was saved by Alisson Becker.

Even before kick-off, there were a couple of points of controversy – the managers weren’t wearing traditional FA Cup final suits, and Chelsea were playing in their yellow away kit.

Liverpool began the match very brightly and threatened to blow Chelsea away early doors. After Trent Alexander-Arnold released Luis Diaz with a wonderful outside-of-the-boot through ball, the Colombian looked destined to score, but Edouard Mendy denied him, and Naby Keita fired the rebound wide.

The Blues were beginning to find gaps in the Reds’ defence, with Marcos Alonso next to go close before Liverpool suffered a setback as Mo Salah had to be replaced after suffering an injury.

The two sides went into the break goalless, and after the break, Alonso and Pulisic again went close after the break before the Spaniard rattled the bar from a free-kick. Diaz and then Andy Robertson both struck the post as we headed into the final 10 minutes of normal time but neither side could register a goal before regulation time elapsed.

For the second time this season, a cup final between Chelsea and Liverpool went to penalties. Liverpool then won 6-5 on penalties, with Kostas Tsimikas scoring the winning spot-kick.