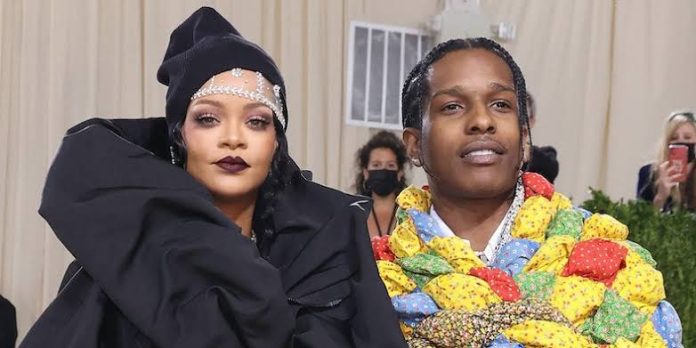 TMZ reports that the couple’s first child together was born on May 13 in Los Angeles.

However, the baby’s name is yet to be confirmed.

The new parents were last spotted dining out together for the first time since Rocky’s arrest in April.

The expecting parents were photographed dining at Georgio Baldi on Saturday night, and reports state that the dinner was sort of a baby shower with family and friends.

A$AP Rocky was arrested on Wednesday last week after he and Rihanna arrived at LAX from Barbados. The Los Angeles Police Department detained him after arriving on a private plane that morning, returning from a vacation with Rihanna in her native Barbados.

In January, the couple unveiled their pregnancy in a record-breaking announcement.

The entertainment and fashion mogul behind the hits “Diamonds” and “Umbrella” was pictured hand in hand with boyfriend A$AP Rocky, sporting a long pink jacket buttoned only at the top, paired with a long bejewelled necklace over her bare belly.

Rumours of their relationship hit social media before the pair confirmed that their romance was official last year.

In an interview with GQ magazine published in May 2021, Rocky referred to Rihanna as the “love of my life” and “the One.”

Asked in that interview if he was ready to be a father, A$AP Rocky said, “I think I’d be an incredible, remarkably, overall amazing dad.”

“I would have a very fly child. Very.”