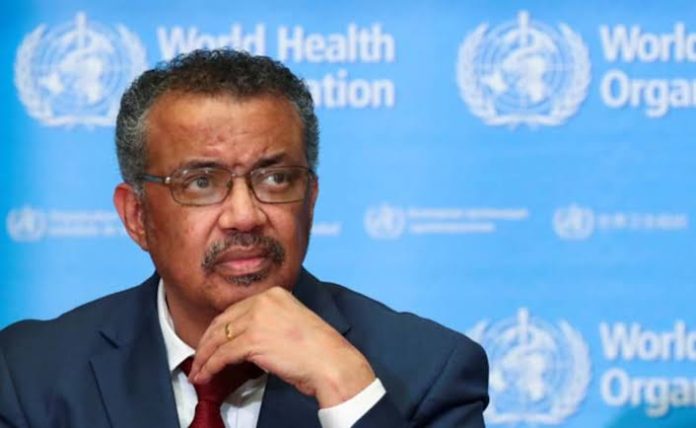 Tedros Adhanom Ghebreyesus, the first African to head the WHO, was re-elected on Tuesday, tearfully accepting a second term as he recalled his humble upbringing as “a child of war” and pleading for peace.

His re-election was announced to thundering applause during the World Health Organization’s main annual assembly, after receiving more than two-thirds of secret-ballot votes cast, as needed to be appointed.

The UN health agency did not provide a breakdown, but sources in the room said he had received 155 of the 160 votes cast.

“I am really, really overwhelmed by the support,” Tedros told the assembly.

“I am really proud to be WHO.”

The Ethiopian former minister of health and of foreign affairs has become a familiar face worldwide as he spearheads the global response to the Covid-19 pandemic.

The 57-year-old malaria expert has also increasingly been sounding the alarm over the heavy toll that conflicts like the war in Ukraine are taking on global health.

After accepting his re-election, Tedros made an impassioned and personal plea for peace.

With a trembling voice, he pointed out that he himself was “a child of war… from a poor family”.

He recalled experiencing conflict at a very young age, and also losing his younger brother to disease due to a lack of access to medicine.

“That I was spared was just pure luck. It could have been me, I could have died more than 50 years ago,” he said, describing how the strong emotions from that time rushed back during a recent visit to Ukraine.

“When I saw the kids, it was the image from more than 50 years ago that came to my mind, so visible, so haunting, the smell of war, the sound of war, the image of war,” he told the World Health Assembly.

“That’s what I don’t want to happen to anyone. So I hope peace will come.”

Tedros, who has also voiced growing anguish at the conflict raging in his home region of Tigray since late 2020, has cautioned a divided world cannot properly address the mountain of health emergencies and challenges before it, including the pandemic.

Peace “is a prerequisite for health”, he said.

That is a message he is eager to push as he prepares to take on a second five-year term from mid-August.

His first term in office was turbulent, as he grappled with the global response to the pandemic and a long line of other crises, including a sexual abuse scandal involving WHO staff in the Democratic Republic of Congo.

While Tedros has faced his share of criticism, he has received broad backing.

African nations especially have been pleased at the attention paid to the continent and at his relentless campaign for poorer nations to receive a fair share of Covid vaccines.

Since US President Joe Biden’s arrival in the White House, Tedros has also enjoyed support in Washington.

State Department spokesman Ned Price congratulated Tedros and voiced appreciation for steps he has taken, saying the United States would work with him “to improve the organisation’s agility, its transparency and its accountability”.

That marked a major about-face from the start of the pandemic, when Biden’s predecessor Donald Trump began pulling the United States out of the WHO, accusing it of being Beijing’s puppet and helping cover up the initial Covid outbreak.

Ironically, the main source of opposition has come from Tedros’s own country.

Angered by his comments about the dire humanitarian situation in Tigray, Ethiopia’s government accused him of having “abused his office” to advance propaganda.

On Tuesday, the representatives of Ethiopia and Eritrea, whose troops have reportedly been fighting alongside Ethiopian government forces in Tigray, loudly voiced objections as Botswana tried to congratulate Tedros on behalf of African countries.

But they appeared to be on their own, with all regions and a long line of countries, including the United States and Russia, warmly congratulating him on his re-election.

There is no shortage of challenges ahead, with the Covid-19 pandemic still raging and demands for dramatic reforms of the entire global health system to help avert similar threats going forward.

In her congratulatory statement, US Assistant Health Secretary Loyce Pace hinted at the challenges ahead.

“The truth is, there is still much more work to do to modernise the WHO so that it is more effective and agile,” she said, vowing support at a time when “the entire global health ecosystem is under pressure.”