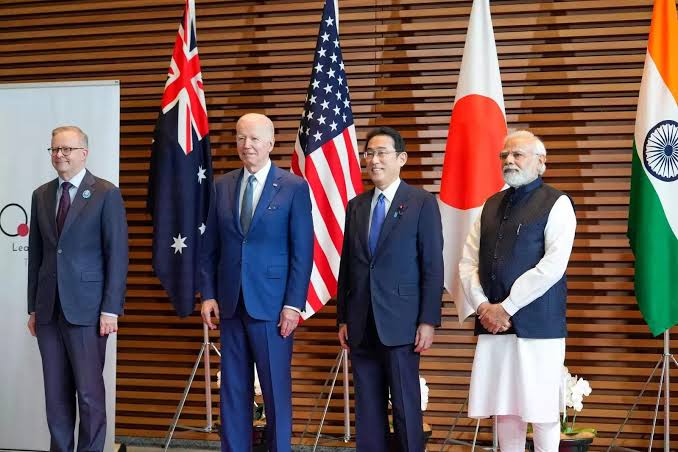 Leaders of Japan, India, Australia and the United States met in Tokyo on Tuesday, looking to put China on notice as it expands its military and economic influence in the region.

The summit of the grouping known as the Quad comes a day after US President Joe Biden said Washington would be ready to intervene militarily to defend Taiwan, prompting China to accuse him of “playing with fire”.

Tuesday’s gathering is expected to produce fewer fireworks but still be clearly directed at China.

“This is about democracies versus autocracies, and we have to make sure we deliver,” Biden said as the Quad summit began.

There is growing regional discomfort with Chinese military activity including sorties, naval exercises and encroachments by fishing vessels that are viewed as probing regional defences and red lines.

Adding to concerns are China’s efforts to build ties with Pacific nations including the Solomon Islands, which sealed a wide-ranging security pact with Beijing last month.

China’s foreign minister will visit the Solomon Islands this week, with reports suggesting he could add other countries including Vanuatu, Samoa, Tonga and Kiribati.

In a nod to those concerns, Japanese Prime Minister Fumio Kishida urged Quad members to “listen carefully” to regional neighbours, including the Pacific islands, “to help resolve the immediate challenges they face”.

“Without walking together with countries in the region, the Quad cannot be successful,” he said.

The Quad nations are expected to agree Tuesday on a deal to monitor regional maritime movement, a White House official said.

The “major initiative” will track “what is happening in countries’ territorial waters and exclusive economic zones”, the official told reporters.

Collected data will be unclassified and shared with “a wide range of partners” to help monitor activities like illegal fishing.

Biden, Kishida, Albanese and Indian Prime Minister Narendra Modi will be looking to present a united front, but there are divisions behind the scenes.

India is the only Quad member that has not condemned Russia’s invasion of Ukraine, and Biden has repeatedly described a strong response to Moscow as a deterrent to other nations considering unilateral military action — like China.

US strategy is for a “free, open, connected, secure and resilient Indo-Pacific. Russia’s assault on Ukraine only heightens the importance of those goals — the fundamental principles of the international order,” he said.

Biden will meet Modi and Albanese one-on-one later Tuesday and “is very aware that India has its own history, its own views”, the White House official said.

“The question is how they’re addressed and how they’re managed. And I think the president is very much of the view that the way to do this is to have candid, direct conversations,” the official added.

India is expected to seek a softer overall tone to any joint Quad statement, shying away from the more muscular language employed by Washington, Canberra and Tokyo in recent months.

But Biden said the grouping was of growing importance, calling it a “central” partnership.

“In a short time, we’ve shown the Quad isn’t just a passing fad. We mean business,” he said.

Biden arrived in Japan on Sunday after a stop in Seoul as he tries to reassure Asian allies his administration has not been distracted by the war in Ukraine.

Hanging over the regional tour has been the threat that North Korea could be planning fresh missile launches or even a nuclear test.

Speculation that a launch could happen when Biden was in Seoul did not materialise, but Washington has said it remains “prepared”, and Pyongyang’s missile programme is.