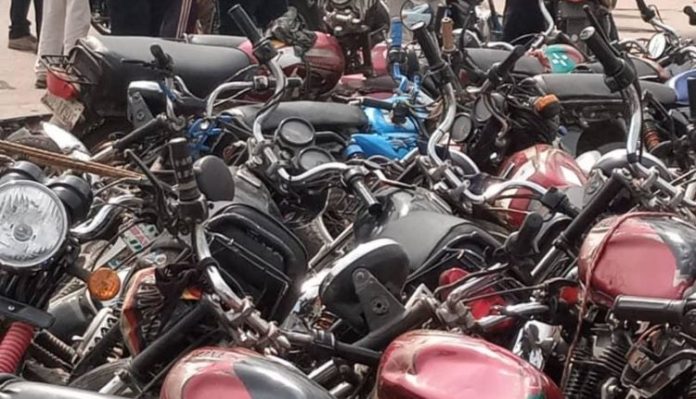 Amid security reports that some of those parading as commercial motorcyclists are indeed hoodlums and bandits, who have invaded Lagos, the State Environmental and Special Offences Enforcement Unit, the Task Force, said it will intensify the crushing of seized motorcycles.

According to the Task Force, this will send a signal that the agency is poised to enforce the ban on activities of commercial motorcyclists in six Local Councils of the state as announced by Governor Babajide Sanwo Olu.

Chairman of the Task Force, Chief Superintendent of Police (CSP) Shola Jejeloye, who revealed this, told The Guardian that despite arrests, the number of Okada riders have increased in the state.

“For instance, if we arrest 50 today, you will see more than 150 motorcycles on the same spot when we return after two weeks. The agency is working, but these guys seem to have more money to buy new ones.

On why the exercise remains the best option, the agency’s Director, Press and Public Affairs, Gbadeyan Abdulraheem said crushing of impounded motorcycles will continue, until the state completely gets rid of Okada on prohibited routes. “Crushing remains the best option because we don’t want them to go back to Lagos highways and streets, it is a continuous exercise.

According to him, the agency crushed a total of 11,820 motorcycles between January and November last year.
He stressed that though, they are yet to crush this year, they are committed to sanitising the state.

Abduraheem, however, blamed the spike on motorcyclists in the state on crises from neighbouring countries.

He promised that the presence of commercial motorcyclists is a matter of time and that it will be a thing of the past in no distant time.

“When you look at Africa as a whole, especially the West African sub-region, you hardly see any country not plagued by unrest, so, they have found a comfort zone, which is Lagos. People migrate from the northern and eastern parts of the country to Lagos; some of these northern states have banned Okada so, there is no other place to go than Lagos.

“As we crushed, we experienced an influx of more, even from other countries like Ghana, Togo, Mali, Chad and Benin Republic. Their belief is that once they get to Lagos, they will see someone to buy a motorcycle for them and they can make N5, 000 per day. N5, 000 is a big money in their countries, by the time they convert our money to their currency, they will become millionaires within six months.

“You can imagine that Kano banned Okada and the whole Okada riders in that state came to Lagos, but I believe one day will be one day, because there is no day we will not impound over 500 motorcycles, yet we still see them in large numbers on the road.

“These guys know every nook and cranny of Lagos, so it has a serious security implication; a total ban is the best for us.”