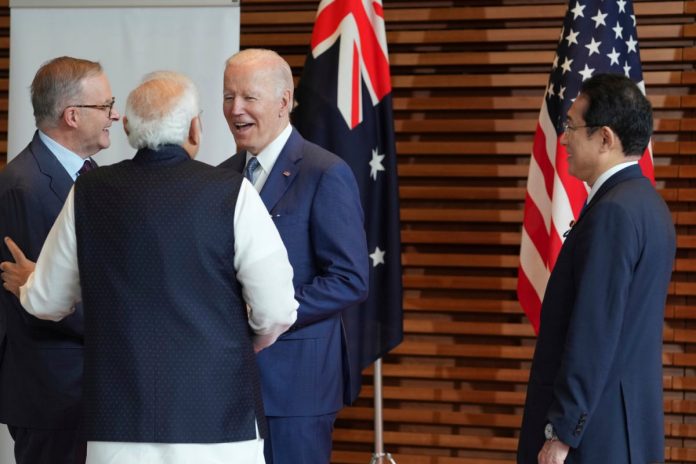 Leaders of Japan, India, Australia and the United States warned Tuesday against attempts to “change the status quo by force” as concerns grow about whether China could invade self-ruled Taiwan.

A joint statement by the so-called Quad bloc avoided any direct mention of China’s growing military power in the region, but left little doubt about where its concerns lie.

The carefully worded document also made reference to the conflict in Ukraine, but without offering any joint position on the Russian invasion, which India has pointedly declined to condemn.

The Quad’s other members have been less coy about their view that a strong response to Russia’s war is needed, one that would deter other countries, including China.

“As Russia’s invasion of Ukraine is shaking the fundamental principles of the international order… (we) confirmed that unilateral attempts to change the status quo by force will never be tolerated anywhere, particularly in the Indo-Pacific region,” Japan’s Prime Minister Fumio Kishida said, using another term for the Asia-Pacific.

The group’s statement made no mention of Russia, or China, but inveighed against a range of activities that Beijing has regularly been accused of in the region.

“We strongly oppose any coercive, provocative or unilateral actions that seek to change the status quo and increase tensions in the area, such as the militarisation of disputed features, the dangerous use of coast guard vessels and maritime militia and efforts to disrupt other countries’ offshore resource exploitation activities,” it said.

Hours after the summit, Japan said Chinese and Russian military planes had flown jointly over the Sea of Japan and East China Sea as the leaders met, in a move the country’s defence minister called “provocative”.

“As the international community responds to Russia’s aggression against Ukraine, the fact that China took such action in collaboration with Russia, which is the aggressor, is cause for concern. It cannot be overlooked,” Nobuo Kishi told reporters.

The Quad nations are attempting to build their loose grouping into a more substantive counterweight to China’s rising military and economic power, despite their differences.

They unveiled plans to invest at least $50 billion into regional infrastructure projects over the next five years, and a maritime monitoring initiative seen as intended to bolster surveillance of Chinese activities.

The moves come with worries over recent efforts by China to build ties with Pacific nations including the Solomon Islands, which signed a security pact with Beijing last month.

China’s foreign minister will visit the Solomon Islands this week, with reports suggesting he could add stops in other Pacific nations including Vanuatu, Samoa, Tonga and Kiribati.

Kishida urged Quad members to “listen carefully” to regional neighbours, including the Pacific islands, while Australia’s newly elected Prime Minister Anthony Albanese said the bloc needed to “push our shared values in the region at a time when China was clearly seeking to exert more influence”.

The Quad met a day after US President Joe Biden raised eyebrows and the regional temperature by saying Washington was ready to intervene militarily to defend Taiwan against any Chinese attack.

He insisted Tuesday that his comments did not mean a change to Washington’s longstanding “strategic ambiguity” on how it might respond to a Chinese invasion, prompting another fierce response from Beijing.

Foreign ministry spokesman Wang Wenbin accused Washington of playing “word games” on Taiwan and warned of an “unbearable cost” if the United States “carries on down the wrong path”.

If Biden was keen to avoid being seen as changing policy on Tuesday, he left little doubt about where the Quad’s focus lies.

“This is about democracies versus autocracies, and we have to make sure we deliver,” he said as the summit began.

Among the concerns in the region are increased Chinese sorties, naval exercises and encroachments by fishing vessels that are viewed as probing regional defences and red lines.

The bloc said its new maritime monitoring programme would “promote stability and prosperity in our seas and oceans”, again avoiding pointing the finger at Beijing while referencing illegal fishing — an accusation frequently levelled at China.