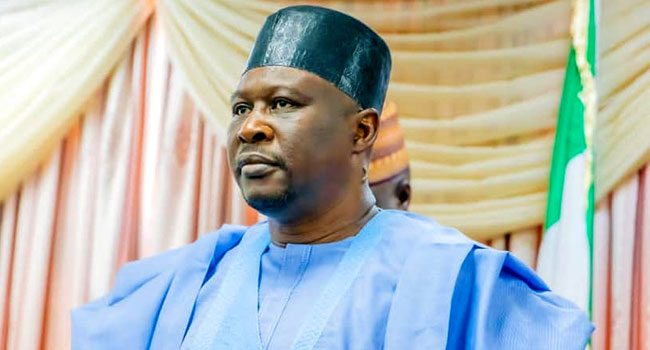 The Governor of Adamawa State, Ahmadu Umaru Fintri has won the Peoples Democratic Party (PDP) governorship primaries in the state.

The state governor won with a total of 663 of the 668 votes, with five of the votes declared void.

An elated Fintri appreciated delegates, party leaders and elders at what he described as “a defining moment for our great party in Adamawa State”.

“We demonstrated our anger at the way we were governed by the party in power in the State at that time. We made a collective resolution to take back our state from the All Progressives Congress (APC) whose performance in governance was far below any acceptable rating,” he said

“That resolution was what made you entrust the flag of our great party to me as your candidate for the 2019 general election in the State. I carried the flag with pride and led us to victory in the 2019 election.”

He remarked that the PDP disregarded his affluence in casting their votes as it showed the party’s commitment to a free and fair electoral process.

“The decision you took could only happen in PDP – a party with deep democratic roots. It is only in PDP that such a decision could be made in an open election where a of my political background could emerge as the party’s flagbearer,” he also said

“You trusted me to lead the onslaught not because I was the richest of all the
aspirants or for any pecuniary consideration. You didn’t even care about where I was coming from or the faith I profess. You entrusted your mandate to me.”

The one-time speaker of the state assembly also decried the level at which the state was riddled with economic, infrastructural and security challenges on assuming the top job.

“On assumption of duty in 2019, we met a State with heightened insecurity and uncertainty as a result of the remnants of the activities of the Boko haram insurgency in the Northern zone with some communities largely unhabitable; Farmer/Herder clashes which had threatened food security in the State and the nation at large.”

“We also met a decayed and over-stretched infrastructure or outright lack of them, especially in the urban centres. Such as good roads, potable water,
Affordable Housing, Power and Energy to support the growth of MSMEs,
as well as poor transport infrastructure, inaccessibility to Rural Communities where the State’s abundant resources lay untapped.”

Fintri became the acting Governor of Adamawa State following the impeachment of Admiral Murtala Nyako, the former governor of the state in July 2014, handing later to Bala James Ngilari after serving for three months.

He would eventually be declared the winner of the 2019 by-election in the early hours of Friday after having secured 376,552 votes to defeat the incumbent Governor Jibrilla Bindow of the All Progressives Congress (APC) who polled 336,386 votes.