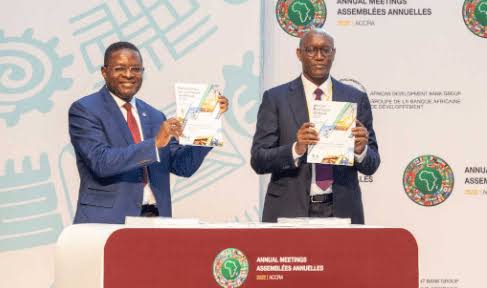 The African Development Bank has forecasted the Nigerian economy to grow by an average of 3.2 percent in two years despite suffering from the impact of the Russian-Ukraine war.

This was disclosed by AfDB in its African Economic Outlook 2022, released at the ongoing Annual General Meeting (AGM) of the Bank in Accra, Ghana.

The report, which focuses on the growth prospects of the continent in the context of the COVID-19, climate change adaptation, energy transition and other structural challenges, projected that growth in Africa’s biggest economy will grow by 3.4 percent in 2022 and 3 percent in 2023. This means the Nigerian economy will grow at an average of 3.2percent in 2years, according to the bank’s estimates for the country.

The AfDB growth forecast is currently in line with the 3.11 percent growth recorded in the first quarter of 2022, according to data from the National Bureau of Statistics.

“Disruptions to global trade and supply chains—primarily in agricultural, fertilizer, and energy sectors—following the Russia– Ukraine conflict and the corresponding sanctions on trade with Russia have tilted the balance of risks to Africa’s economic outlook to the downside,” he said.

The report states that the Nigerian economy will benefit from the high oil prices, recovery in the service and manufacturing sector, and government policy support for agriculture.

It warns that the effect of higher oil prices may be offset by production constraints due to technical challenges and insecurity in oil-producing regions.

“Improved revenue collection will help narrow the fiscal deficit to an average of 4.5 percent of GDP. Public debt is targeted to reach 40 percent of GDP by 2024 on fresh borrowing,” the report states.

The headwinds to the outlook may be exacerbated by rising insecurity and policy uncertainty underpinned by reversal of initially planned removal of subsidies on premium motor spirit a year before the 2023 elections.”

The report also estimates the average inflation rate in Africa to remain elevated at 16.9 percent in the year and stay above the pre-COVID era until 2023.

The report add that Nigeria recorded the West Africa’s highest poverty increase with about 5.4 million new poor owing to the impact of the pandemic and Russian-Ukraine conflicts.

Also, the report lays out arguments for sustainable development and fairness for a just global energy system and examines low-carbon transition pathways and new opportunities for Africa’s sustainable growth anchored on its resource endowment.

It calls for candid discussions on the current lopsided global climate finance architecture, outlines ways for reforms, and maps existing sources of climate finance targeting the continent’s needs and gaps.

It further examines innovative climate finance instruments to build resilience and a just energy transition at the international, regional, and national levels for the benefit of the continent.