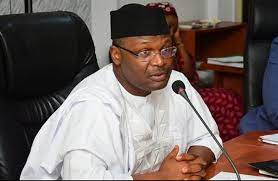 The Chairman of the Independent National Electoral Commission (INEC), Prof Mahmood Yakubu, has expressed concern over the rising monetisation of the nation’s electoral process by politicians.

This was as a former chairman of the commission, Prof Attahiru Jega, cautioned INEC against altering the election timetable, saying doing so would be a recipe for electoral disaster.

The duo spoke Wednesday in Abuja at a one-day colloquium on “Emerging Issues that will shape the 2023 general elections in Nigeria” organised by the Centre for Democracy and Development (CDD) and the Open Society Initiative for West Africa (OSIWA).

Yakubu, who delivered the keynote address, said the act of politicians using money to sway delegates to their sides during primaries was worrisome.

He said the commission was also worried about the increasing insecurity across the country and fake news.

He, however, assured that INEC would work with anti-graft agencies to reverse the trend in the interest of democratic development.

He said, “Nigeria is moving towards plutocracy. But there are two dimensions to it, when you have willing collectors, it becomes much more difficult to control the situation. We have seen cases where voters also reject money and voted their choice like what happened in Anambra, and also there are situations where on election day voters go after the vote buyers.

“However, right now, it is now going beyond simply the question of buying votes at polling units. What political parties do is critical to what INEC does too. INEC conducts secondary elections, but it is candidates that participate in the secondary elections and the way money is exchanging hands that is a source of concern.

“However, we have renewed our partnership with the Economic and Financial Crimes Commission (EFCC) and the Independent Corrupt Practices and Other Related Offences Commission (ICPC) on this aspect.”

He further said about 430 million ballot papers would be printed for the 2023 elections.

On his part, Prof Jega said though there had been incremental positive changes in INEC over the years, the political class had made lots of efforts to undermine the integrity of elections.

He commended INEC for refusing to yield to the pressure of political parties to change the timetable for the elections.

He said the use of money in Nigerian politics was a serious issue of concern, lamenting that rather than having improvements in that regard, Nigeria seemed to be sliding backwards.

Jega said, “With the way money is spent by politicians, the country is moving in the direction of becoming a plutocracy rather than a democracy. Plutocracy is basically government of the rich for the rich by the rich.

“Imagine, the National Assembly altered the Electoral Act to increase the threshold of how much a candidate can spend for election finance. That is something that we should all have opposed.

“Regrettably, we were too busy opposing the issue of electronic transmission and so on that we lost focus. We didn’t pay sufficient attention to what they were trying to do because they now smuggled the issue of huge financial outlays required of candidates.”

A senior fellow at the CDD, Prof Jibrin Ibrahim, decried the “extensive growth of banditry within the political class”.

He said elections in the country would always become complicated when a significant percentage of the political class were crooks and criminals.

According to him, the open partisanship of the Central Bank of Nigeria (CBN) Governor, Godwin Emefiele, is sufficient enough to mar the credibility of the 2023 elections.