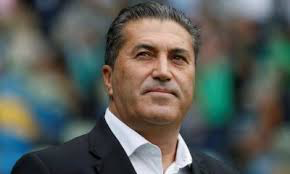 Few weeks after being appointed the new head coach of Nigeria, Jose Peseiro is ready to hit the ground running after stating he hopes to help the Super Eagles win the Africa Cup of Nations for the fourth time.

The Portuguese was earlier this month confirmed by the Nigeria Football Federation as the new Eagles coach, after interim Austin Eguavoen, who was appointed on a temporary basis, stepped down in March following the team’s failure to qualify for the Qatar 2022 World Cup.

The 62-year-old Peseiro has joined up with the team as they prepare for the friendly games against Mexico and Ecuador in the United States.

Looking beyond the friendly games, Peseiro said he was delighted to have taken up the Eagles job and hoped he would help deliver the fourth AFCON title for Nigeria.

“Pride! It is with great pride and joy that I am the coach of one of the greatest football nations in the world,”the former Real Madrid assistant coach wrote on Twitter.

“Commanding the Super Eagles starts with knowing how to respect history, value it and be inspired by its roots.

“Over 200 million Nigerians, from all states and ethnicities, want the same thing: success.

“We will work with great ambition, so that in the end we can finally call Nigeria the “four-time African champions!”

Having won the biggest football showpiece in Africa in 1980 and 1994 in Lagos and Tunisia respectively, Nigeria last won the AFCON in 2013 in South Africa.

The Portuguese is expected to lead Nigeria to the 2023 AFCON in Ivory Coast should the three-time African champions get past the qualifying stage against Sierra Leone, Guinea Bissau and Mauritius.