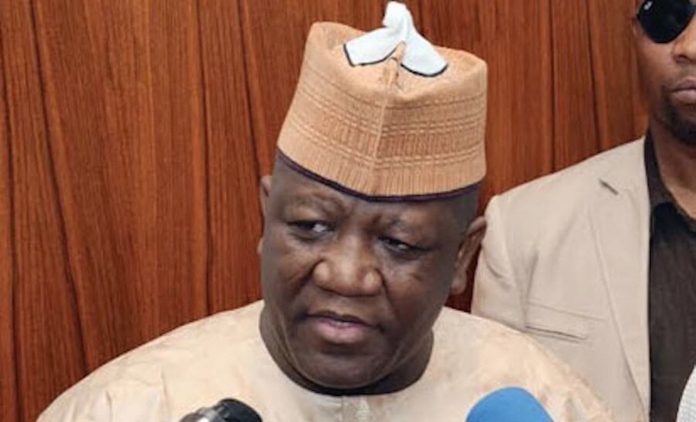 Former Governor Abdulaziz Yari of Zamfara has been caught in the web of EFCC probe of the N80 billion loot by the suspended Accountant-General of the Federation, Ahmed Idris.

The former governor, who has forfeited some assets to the ICPC, another graft agency, has been arrested by the EFCC, as the Idris probe deepens.

According to a report by Premium Times, Yari was arrested on Sunday at his residence in Abuja.

The arrest comes days after he won, unopposed, the ruling APC’s ticket for Zamfara West senatorial election holding next year.

The AGF was arrested on 16 May over allegations of corruption to the tune of N80 billion.

According to the sources, suspicious transactions between Mr Idris and Mr Yari were “in the area of 20 billion Naira”.

The report has not been officially confirmed by EFCC.

The final forfeiture order was made on 26 January 2021 by the Federal High Court, Abuja.

Justice Ijeoma Ojukwu, in a judgment, held that the former governor had not shown good cause why the order sought by the Independent Corrupt Practices and Other Related Offences Commission (ICPC) should not be granted.

The ICPC had instituted a suit, praying the court for the former governor to show cause why the money under investigation should not be finally forfeited to the Federal Government.

In a ruling in February this year in another case filed against the ex-governor by the ICPC, a Federal High Court, Abuja, gave an interim order forfeiting 10 properties of former Governor of Zamfara, Abdulaziz Yari, to the Federal Government.

Some of the properties are located in the highbrow areas of Abuja, Kaduna, Zamfara and Maryland in the United States of America.

The judge held that after carefully reading through the ICPC’s motion, exhibits attached and other processes, he was inclined to grant the order.