The UCL final has come and gone leaving Real Madrid as the reigning champions of Europe, concluding yet another chapter of the biggest tournament in club football on an all too familiar note.

There were a lot of outstanding efforts and performances this season, like in every Champions League campaign ever. However, AF24NEWS has decided to ignore everything else today to spotlight some of the standout losers of the season–teams that will most rue their failure to secure a title this season.

Manchester City can’t seem to break their funk despite having arguably the best starting eleven on God’s green earth.

Again successful domestically (winning a fourth English Premier League title in five years), the club has, however, continued to struggle in Europe, falling short again and again despite heavily reinforcing and reinvesting season-in-season-out.

In the new era, the Arab-backed club has been resurgent, earning 6 PL titles in the last 11 seasons. However, it is no secret that the ownership hierarchy expected more than domestic dominance when they dispensed $2bn over 12 years.

This season, as usual, City went roaring into the quarterfinals after making light of their Group A matchups (they finished top of the group, above a star-studded PSG) and soaring past Lisbon with a 5-0 victory in the first leg of their Round of 16 matchup. The Citizens also seemed to heave a collective sigh of relief when they survived Atletico Madrid’s militant bulldozing in the quarterfinals.

Unfortunately, their steam ran out when they met the eventual winners (and owners) of the competition, Real Madrid. Madrid used their deal with the gods this season to whip up magic twice in the final minute of their second leg game vs City and go through on aggregate in the most nerve-wracking two minutes of their season’s campaign in Europe.

However, despite making it to the semifinals and conceding the supernatural circumstances of their defeat this season, Manchester City football club will still consider this another abysmal campaign in Europe. 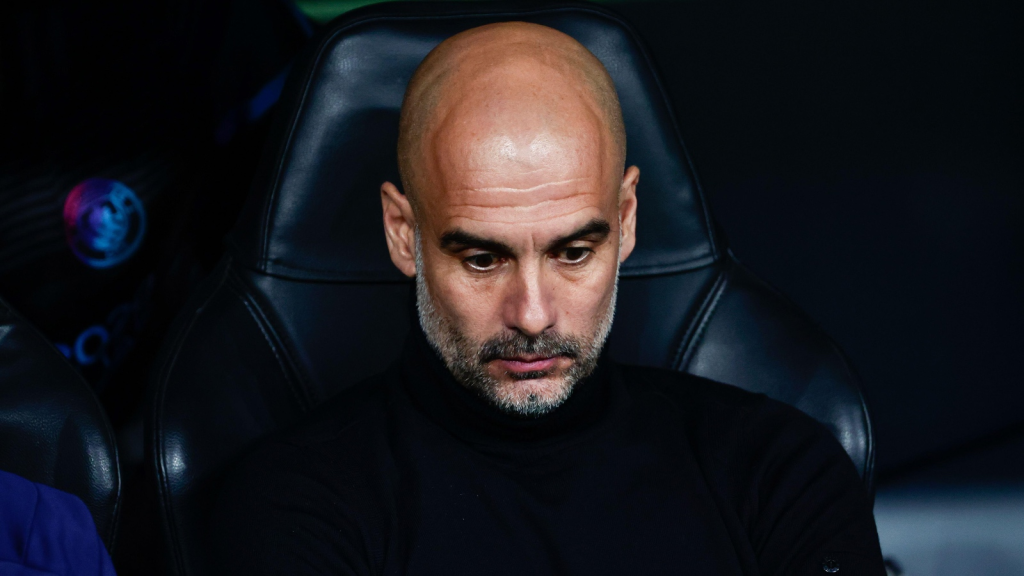 Although we have had to separate Guardiola from Manchester City’s travails, both entities are facing the same battles. While the narrative with City is one of an oil-rich club battling to establish a legacy in the lore of club football, Guardiola’s headache is quite similar.

The 51-year-old manager is fighting to establish himself as one of the managerial pantheons of Champions League football. And although many have him firmly among the top-five greatest managers in the competition, many more see his appearance in the Champions League history books as fortunate streaks of blatant luck.

His reputation domestically is redoubtable—he has won the domestic league title at least three times with every club he has ever managed (four with Manchester City’s 2021/2022 triumph). Also bearing countless domestic trophies, Guardiola is no doubt a serial winner. However, the last of his two Champions League trophies (as a coach) came over ten years ago, which is considered a lifetime for most sports fans.

Both of Pep Guardiola’s Champions League managerial honours came when he was in charge of a team considered to be the greatest assembled in football history. Many have since suggested that his role managing a team containing all-time greats like Lionel Messi, Xavi, and Iniesta was nothing more than a coincidental, serendipitous privilege.

Guardiola has fought the narrative that he is an intelligent-but-lucky coach since leaving Barcelona at the end of the 2012 season. Still, success in the Champions League has continued to elude him.

Hence, he would undoubtedly be counting this season’s UCL loss as a personal failure separate from his current responsibilities, and his employers are certainly not as disappointed as he is.

In a summer of summers, PSG assembled what many thought would be the most formidable squad in club football history. The heavily-funded club dug into its deep pockets to whip out mouth-watering contracts for some of the best players in the world and procured arguably the best pound-for-pound players per position in a transfer window for the ages.

Gianluigi Donnarumma, fresh off a player-of-the-tournament, Euro 2020 winning season, was placed in-between the sticks behind a defence that had just added Hachraf Hakimi and four-time UCL champion Sergio Ramos to its ranks. In the middle of the field, PSG acquired Wijnaldum, who had just orchestrated one of the most memorable comebacks in UCL history just two years before. In front, they gave a Neymar and Mbappe duo the best possible prong to complete a world-beating trident: Lionel Messi. Messi had also just finished off a major entry on his career checklist, completing football with a Copa America win with Argentina and as the standout performer too.

This was a team of serial winners in a club hungry to begin a dynasty formidable enough to dominate football—continentally and domestically—for decades to come.

What could possibly go wrong for this Mauricio Pochettino-led squad?

We witnessed the gravely underwhelming season PSG had this year, and recounting their disappointment would be a lengthy exercise.

However, the greatest of such disappointments was the team’s collapse in the second leg of their Round of 16 matchup vs eventual Champions Real Madrid.

PSG gave up a 2-0 aggregate lead in just 17 minutes when they watched on haplessly—just as fans worldwide were doing—when Karim Benzema used the circumstances to pick up a campaign-winning scoring streak that ended in the semifinals.

PSG’s quest will undoubtedly continue next season, as they’ve succeeded in securing a contract with their star and standout performer, Kylian Mbappe. However, after this year, everyone still retains permission to call their galactico-esque experiment a blatant failure.

Liverpool, who had a more-than-decent season, makes it to this list for only two reasons, the first being that they were agonisingly close to missing the list entirely. Losing in the finals of any competition makes one a significant loser, but what makes Liverpool’s loss particularly heart-shattering is the circumstances of their road to Paris.

We are yearly reminded that there are no easy teams to play against in the Champions League, but this particular year, relative to Real Madrid’s trial by fire, the Reds all-but-waltzed into the UCL finals. Hence, they will almost certainly be rueing their chances because they might not be seeing another year where they have it any less taxing than this.

Topping Group B without registering a single loss, Liverpool side-stepped Inter Milan in the Round of 16, winning 2-1 on aggregate. In the quarterfinal, they ran into Benfica, who managed to make a challenge out of the matchup by requesting Liverpool’s formidable elite strikers to work a little harder and grind out a 6-4 win over both legs.

The semifinals came with its troubles, and after a 2-0 victory in the first leg of their matchup with Villareal, they had a minor setback in the second leg that caused them to again rally for a 5-2 aggregate victory to get through to the final, which they lost 1-0 to a resurgent post-Ronaldo Madrid side.

The other reason Liverpool are considered the biggest losers in this year’s competition is the small matter of how much the players wanted the final matchup as well. After qualifying ahead of Madrid, Salah had been vocal about how much he relished the opportunity to challenge the Spanish giants for the Champions League to make up for their final loss in 2018.

To be fair, many big clubs underwhelmed in the champions league this season. Some honourable mentions are Dortmund and Barcelona, who crashed out in the group stages, Inter Milan, and even Atletico Madrid. However, what places Manchester United in this league above these teams is the arrival of Cristiano Ronaldo.

While not much criticism could be hinged on the 37-year-old directly—he was in decent form for most of the season—the team extended the trophyless run of the greatest player in the history of the Champions League to four years.

After topping their tame Group F, Manchester United hit the Atletico Madrid wall and fell out 2-1 on aggregate.

The culprits for the woes of this Manchester United side are numerous—a faulty defence, an inconsistent midfield and a one-dimensional strike force. However, it all falls to the management of Ralf Rangnick, whose appointment did little to stay the slippery slope the English club has been on for years now.