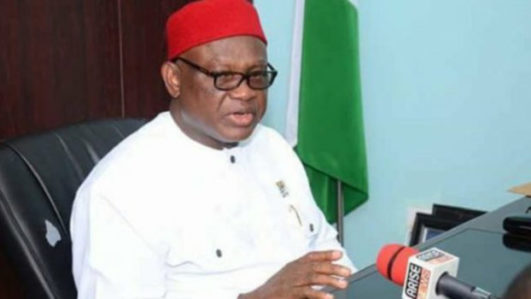 The founding Chairman of the All Progressive Grand Alliance, Chief Chekwas Okorie has made a heroic return to the party after ten years of his exit.

Chief Okorie was received into the party by the Supreme Court recognised National Chairman of APGA, Chief Edozie Njoku, on Wednesday.

“Nigeria has come to a point where the social contract of the political parties with the Nigerian people must be interrogated to know what they mean and separate it from what they say.”

Speaking about his ordeals in APGA and his political journey thereafter, the Igbo leader said that they “didn’t just run away when the problems started, we struggled to save the soul of the party. We were in the the court for 8 years, were in Supreme Court three times and no court ever recognised any other person as APGA National Chairman except me.

“We tried reconciliation, there were over 20 attempts to have peace and reconcile all sides but these efforts were frustrated by only one side and we were forced to leave and try our hands elsewhere and founded UPP.

“In 2012, we founded United Peoples Party, UPP, and in the same year, all our leaders in diaspora including Mazi Nnamdi Kanu, Dr Egemba and Uche Mefor said they were tired of the political process and moved on to Radio Biafra.

“Eventually, that UPP couldn’t move forward, in 2020, we decided to try our hand with the ruling party, we collapsed our structure into the All Progressives Congress, APC, that was a difficult decision to make but at the end of the day, we weren’t too comfortable with the APC because haven been in opposition for several years and decades, it wasn’t so easy to change from the way we were made.

“There was pressure from everywhere for us to return to APGA and help rebuild the house but I said to myself and associates that we can’t return via the backdoor.

“Thus, when the Supreme Court in its wisdom corrected the error they made in October 2021 and reaffirmed Edozie Njoku as the authentic National Chairman of APGA.

“In May 14th, 2022, Njoku was in my house for my return to the House I built, after due consultations with my associates, we decided to return.

“I Chief Chekwas Okorie, with all my associates, those present here and outside, we have today, formally returned to APGA under the Chairmanship of Edozie Njoku.”

He commended Chief Njoku for his peace initiative and assured he will be part of the process to bring back the members of the party.

“Njoku is part of the original vision of APGA and never left, I want to join him in that preaching of healing of wounds.

“I will join him in meeting all the important people that needs to come on board including the Governor of Anambra State, Professor Charles Chukwuma Soludo and join in the campaign to win the state for APGA so the Governor will have a conducive political atmosphere to deliver the dividends of democracy to Ndi Anambra.

“All those that have APGA Ticket will be helped to win their election.

“The revolution has started!” he declared.

Speaking earlier, Chief Edozie Njoku, National Chairman of APGA said “those we started APGA will come back to be with us.

“The situation of our country is a sad one and as someone that grew up outside Nigeria, many persons want to come back to the country but they want the country to work again.

“I’m here with the NWC members of the party to see our founder Okorie and he’s not happy with the state of APGA.

“This is a bad period in APGA but we’re not discouraged. The lies are much and I’m having my share of the propaganda. I have been accused of forging supreme Court judgement which is laughable.”