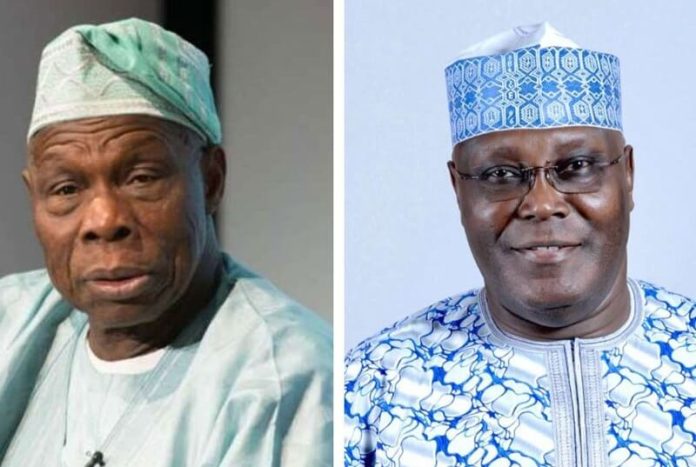 There are strong indications that the outcome of last Saturday’s presidential primary election of the opposition Peoples Democratic Party, may not have met the expectations of some prominent leaders in Southern Nigeria, including former President Olusegun Obasanjo.

Former Vice President, Alh. Atiku Abubakar was declared the winner of the primary election, after polling 371 votes, to defeat his closest rival and Governor of Rivers State, Nyesom Wike, who garnered 237 votes.

According to the New Telegraph’s impeccable source, Obasanjo feels strongly that the 2023 presidency should be zoned to the South, in the interest of equity, justice and fairness.

It was learnt that the foremost nationalist may have concluded plans to throw his weight behind the presidential candidate of the Labour Party (LP), Mr. Peter Obi, a former Governor of Anambra State, who was, until his resignation from the PDP, a frontline presidential hopeful on the platform of the main opposition party.

The sources said, “Let me inform you that Chief Obasanjo’s possible support for Peter Obi is borne out of patriotism and the need for balancing, equity, and justice, considering the plurality of Nigeria.”

Further investigation revealed that a former Governor of Cross River State (name withheld), has been detailed to galvanize support for Obi, whose proven record of achievements as Governor of Anambra State, coupled with his shrewd business sense, have continued to appeal to the former leader of the country.

“On the 29th (May), former President (Olusegun) Obasanjo expressed his unhappiness about the outcome of the presidential primary of the PDP.

READ ALSO: You must have mad passion to rule Nigeria – Obasanjo

“He has (allegedly) commissioned a former Governor of Cross River State, to drive the process of galvanizing support for a Southern Presidency, Obi being the preferred choice.

“As a matter of fact, the former governor is under instruction to bring Obi, and many aggrieved PDP stalwarts and interests together.

“He assured of his total commitment to the project of ensuring the realisation of a President of Southern extraction, for purposes of equity and fair play.

“I know as a fact that the former President said he was travelling outside the country, and that when he returned, he would meet with the strategists, including the ex-Anambra chief executive.

“Obi welcomed the proposed support, and promised the former President of his commitment to a united, peaceful and prosperous country,” another source spoke in similar vein.

Meanwhile, pressure seems to be mounting on Governor of Rivers State, Chief Nyesom Wike, to contest the outcome of last week’s primary. Plans have been perfected to (allegedly) instigate Wike, to challenge the results of the primaries in court, in order to retrieve the ticket.