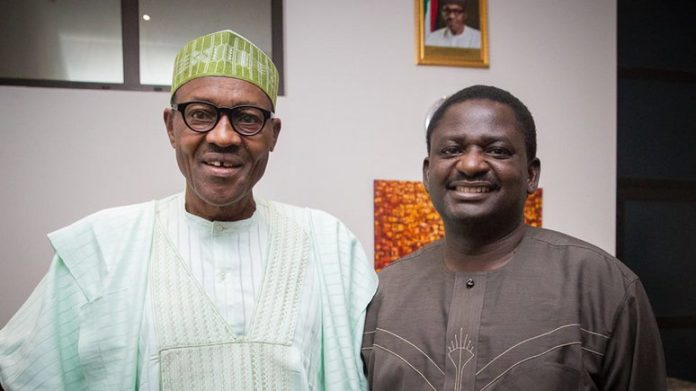 Presidential spokesperson, Femi Adesina, has faulted claims that President Muhammadu Buhari, asked members of the Progressives Governors’ Forum to pick a consensus presidential candidate for the ruling All Progressives Congress.

He said that contrary to reports, the President only met with the governors and gave them his “expectation” for the forthcoming presidential primary of the party.

Adesina, who is the Special Adviser to the President on Media and Publicity, stated these in a piece titled, ‘Visit to Spain: Let’s Buga for Mr President’.

Making clarifications on what transpired during the meeting, the presidential spokesperson explained that Buhari never discussed issues bordering on zoning, consensus, or imposition of candidates during his conversation with the governors.

According to him, President Buhari told them what he would like to see at the APC presidential primary to elect a presidential candidate early next week.

He said, “No word about zoning, consensus, or imposition of candidate. He just charged them to let their plans converge, so that the party would put its best foot forward. Shortly after the meeting, we headed for the airport.

“A short time into the about five hours flight, I went on social media, to see that all hell had broken loose. Trust some Nigerians. When there’s no controversy, they simply create one. They will die of boredom if they don’t have something to wail or ululate about.

“What were they bellyaching on? Oh, he used the words ‘my successor,’ instead of ‘APC candidate.’ That means he wants to rig the election. Otiose.

“Oh, he talked about Governors who performed well being given opportunity to get a second term, for continuity. That means he wants to impose someone from within the government to succeed him. Consensus is what he wants. Puerile.

“Is consensus not one of the acceptable ways of choosing candidates, according to the Electoral Act? So the party can jolly well decide on the method it wants.

READ ALSO: Buhari urged us to settle for a consensus candidate – Governor Sule

“Oh, he didn’t talk about zoning. APC wants to give its ticket to the North. Really? Did you see anything like that in the speech?

“I tell you. When some Nigerians don’t see what they expect in a speech or statement, they simply conjure and create their own. And the wailing starts.”

Meanwhile, Buhari had while addressing the governors on Tuesday ahead of the party’s presidential primary taking place on Monday, stated, “The party has successfully established internal policies that promote continuity and smooth succession plans even at the state and local government levels.

“For example, first-term governors who have served credibly well have been encouraged to stand for re-election. Similarly, second-term governors have been accorded the privilege of promoting successors that are capable of driving their visions as well as the ideals of the party.”

Buhari said he would be seeking reciprocity from the governors ahead of the presidential primary which comes up in the next six days.

“In keeping with the established internal policies of the party and as we approach the convention in a few days, therefore, I wish to solicit the reciprocity and support of the governors and other stakeholders in picking my successor, who would fly the flag of our party for election into the office of the President of the Federal Republic of Nigeria in 2023,” the President added.

He asked the governors to ensure that all interests ‘converge’ as regards the outcome of the presidential primary. The President added that the person who emerges as the presidential candidate must be one who could give Nigerians a sense of victory even before the polls.

Buhari stated, “As we approach the convention, I appeal to all of you to allow our interests to converge, our focus to remain on the changing dynamics of our environment, the expectations of our citizens, and the global community.

“Our objective must be the victory of our party and our choice of a candidate must be someone who would give the Nigerian masses a sense of victory and confidence even before the elections.”