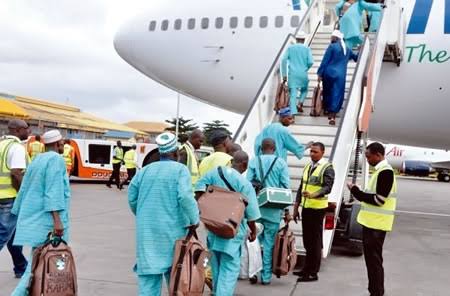 The National Hajj Commission of Nigeria (NAHCON) on Friday in Abuja disclosed that it had concluded arrangements to commence the transportation of 2022 intending pilgrims to the Kingdom of Saudi Arabia on June 9.

The Chairman and Chief Executive Officer of NAHCON, Alhaji Zikrullah Hassan, made the disclosure at the signing of an agreement between the commission and three airlines approved to transport Nigerian pilgrims to the Kingdom of Saudi Arabia.

Hassan announced that the three air carriers that were approved by the Federal Government through the commission were the Azman Air, Max Air and Flynas (Saudi Arabia designated air line).

He urged the airlines to give quality service in line with the standard known in the aviation industry and treat all pilgrims as very important personalities.

Hassan also revealed that by Monday, June 6, the advance team of the commission would be proceeding to the city of Madina and Makkah.

According to him, by the projection of the commission on June 9, the 2022 Hajj inaugural flight of Nigeria will head to Madina.

READ ALSO: First flight for 2022 Hajj to begin next week

” For us today is indeed historic because is the beginning of the hajj operation of 2022. It is clear to all of us that without flight there can be no Hajj for people living outside the kingdom of Saudi Arabia.

” Intending pilgrims must get to Saudi Arabia before they can perform hajj. For that reason flight is key and very important.

” Permit me to use this opportunity to congratulate the successful air carriers all of whom have been with the commission struggle since 2022.

” We also hope that those air carriers who didn’t succeed this year will have a better time some other time,” he said.

Earlier, the NAHCON Commissioner of Operations, Alhaji Abdullahi Hardawa, described the event as epoch after almost three years without Hajj.

He congratulated the successful carriers while urging them to see their selection as a challenge to do their best.

After rigorous exercise, those selected ranked the best three whose names were forwarded to the presidency for approval before sealing the contract agreement.

While Azman Air is entrusted with the transportation of pilgrims from 16 states and the Armed Forces.