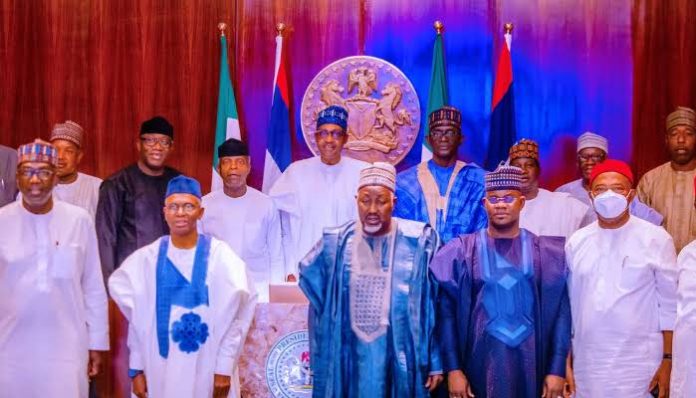 On the day many Nigerian households went into mourning over the brutal killings of family members, President Buhari, Osinbajo, and APC chieftains had a cheerful dinner in Abuja.

On the same day about 50 person's were killed in a church service, Gen. Buhari did not summon security chiefs, what did he do?
The General hosted APC governors to a dinner banquet: feasting on the blood of innocent worshippers, mocking the families of the victim.
Rinu channels tv pic.twitter.com/3h4GjFOGHe

In spite of the tragic killings of dozens of Nigerians at Saint Francis Catholic Church, Owa-luwa Street, Owo, Ondo State, President Muhammadu Buhari held a dinner party for members of the All Progressives Congress national caucus.

The dinner which was held at the State House Banquet Hall on the evening of Sunday, June 4, 2022, took place hours after terrorists who disguised as worshippers had killed women, children, and many Christian worshippers in Ondo State.

The meeting involving the president and the APC chieftains was part of continued consultations of the ruling party with stakeholders to elect a consensus candidate ahead of the party’s presidential primary elections this week.

However, the governor of Ondo State, Rotimi Akeredolu who had been in the Federal Capital city for the dinner ahead of his party’s national convention had to return to the state to attend to the unfortunate attack on worshipers at Saint Francis Catholic Church, in his hometown, Owo.

I was at the scene of the terror attack on innocent worshipers at St. Francis Catholic Church in Owo, today. I also visited the hospitals where survivors of the attack are receiving medical attention.

The attack was the most dastardly act that could happen in any society. pic.twitter.com/I8xv80CTfL

The governor after visiting the church and the hospital where survivors of the attack are receiving treatment vowed that the incident would not happen again.

Akeredolu said he had urged the Heads of Security agencies to take all necessary steps to hunt down the perpetrators and bring them to book.

I just arrived Owo from Abuja following the unfortunate attack on the people worshipping at the St. Francis Catholic Church in Owo.

I have received briefs from the Heads of Security agencies in the state. The assailants will be hunted down and they will pay for their crimes. pic.twitter.com/qIiydy2nh4

The governor while expressing his condolences also advised residents of the state against taking laws into their hands as many have attributed the attack to herdsmen even though the police have not pointed fingers at any group.

But while Akeredolu canceled his engagement in Abuja, President Muhammadu Buhari, Vice President Yemi Osinbajo, party chieftains, and APC governors had a peaceful and cheerful dinner.