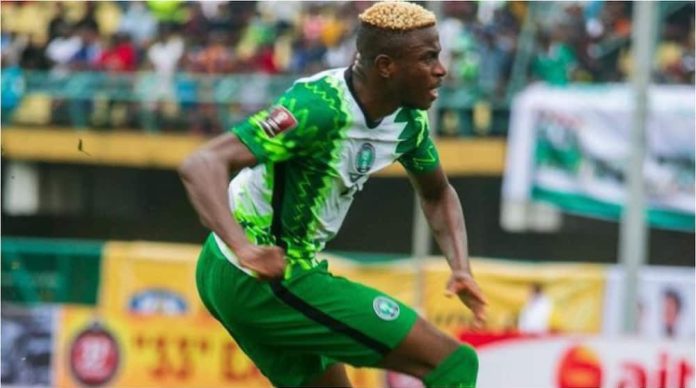 Fans, who were not allowed into the stadium as a result of the one-match ban placed on the country by the world football–governing body, FIFA, had to watch the victory from their screens.

The ban was a punishment for the pandemonium that trailed the 2022 FIFA World Cup playoff round against the Black Stars of Ghana in March. Livid fans had stormed the field when the Eagles failed to qualify for the 2022 World Cup.

Nigeria overcame a stunning early goal to turn the screw on Sierra Leone and eventually win 2-1 to pick all three points in a Day 1 encounter of the 2023 Africa Cup of Nations qualification series at the MKO Abiola Stadium on Thursday.

The fleet-footed Leone Stars, who famously came back from four goals down to tie the match 4-4 in an AFCON qualifier against Nigeria in Benin City in November 2021, had knocked hard at the Super Eagles’ door as early as the 4th minute, when a rasping shot from Mohamed Turay was tipped over the bar by Francis Uzoho.

However, in the 16th minute, Nigeria were level when an exchange of passes between Alex Iwobi and Moses Simon ended with the former emphatically finding the far corner of goalkeeper Mohamed Kamara’s post.

Kamara was again called to action shortly after, saving a strong Moses Simon header, and in the 35th minute, Musa Kamara came close with a stinging grounder as the visitors swarmed forward once more.

Four minutes before halftime, Osimhen scored Nigeria’s second when he drove the ball into the roof of the net when Moses Simon cushioned an Ola Aina cross for the Napoli forward to strike.

The second half of the game was more contentious, although the super eagles picked up more chances to extend the lead.  In the 58th minute, Iwobi and Osimhen combined to unlock the visitors’ defence, only for Samuel Chukwueze to drag a final effort marginally wide of the goal.

Aribo, Osimhen and substitute Ademola Lookman all missed chances as Nigeria pushed for a third, but in added time, the Leone Stars attempted to steal a point before an Aribo intervention denied a goalscoring chance.

Nigeria picked all three points and are atop Group A.

The Super Eagles will now head to Agadir, Morocco for their Day 2 encounter against the ‘The Falcons and True Parrots’of São Tomé and Príncipe on Monday.