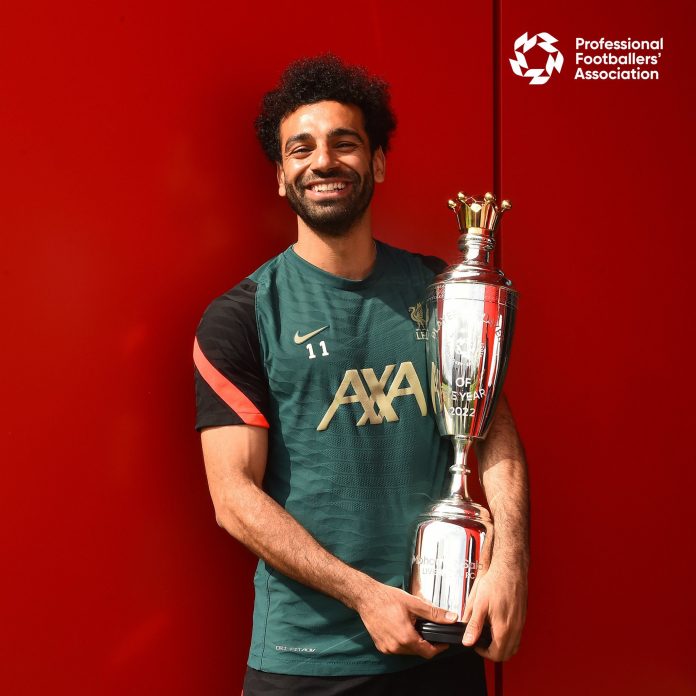 Liverpool forward Mohammed Salah beat off stiff competition from Manchester City’s Kevin de Bruyne to scoop his second Professional Footballer’s Association (PFA) Player of the Year Award for his exploits in the 2021/2022 season.

After an exceptional campaign that saw the Egyptian finish as the Premier League’s joint-top scorer and top assister, Salah won the distinguished award for a second time.

The PFA award is voted for by current and former professional footballers, and Salah has once again impressed his peers above all others in the Premier League.

Earlier, the Egyptian King shared the Golden Boot with Tottenham forward Son Heung-min and also claimed the Playmaker of the Year award after registering the highest number of assists in the EPL last season.

Speaking on his triumph, the Egypt international said: “It’s a great honour to win a trophy, individual or collective and this one is big so, I’m very happy and very proud of that.

“This one is a really good one to win, especially because it’s voted by players. It shows you that you’ve worked really hard and you get what you worked for.

“I have my room with trophies in a cabinet and I made sure that I had another space for one more. I always keep space and just try to imagine that the trophies are going to come.”

“When you get older, you feel like you’re more stable and you know exactly what you want from football so I’m just trying to really chill and help the team. That’s why I think I also won the Playmaker award, because it’s like you’re more aware of the game, so you just try to make the people next to you better and try to make yourself better as well.”