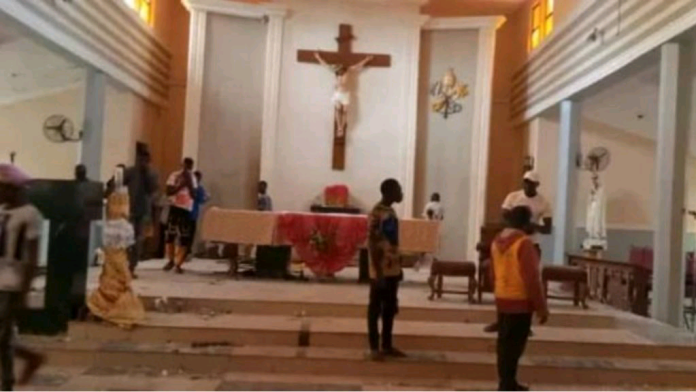 Suspected attackers of the St. Francis Catholic Church in Owo, Ondo State, have been reportedly arrested.
A trending video shows a crowd protesting within the palace of the Olowo of Owo, Oba Ajibade Ogunoye.

The Olowo who spoke in the Owo dialect while addressing the crowd said that he learnt that the suspects have been arrested.

He was however heard urging the youth to be patient, noting that the people of Owo were courageous.

He said, “In Owo, we cannot be conquered by war. People who see you here will know Owo has children that are brave and can be proud of. Let’s exercise patience. What we heard is those who committed the atrocity have been arrested”.

One of them could be heard saying: “They want to take them (suspects) to Akure. “The youths are angry.”

Gunmen, last Sunday, invaded the church and murdered several worshippers, including women and children in Ondo.

The death toll has hit 40, with others injured still at the hospital receiving treatment.
The Police had confirmed that some of the assailants disguised as congregants fired shots from AK-47 rifles.

Meanwhile, the National Security Council, on Thursday, revealed that the Islamic State, West African Province masterminded the deadly attack on St. Francis Catholic Church, Owo, Ondo State that left over 25 people dead on Sunday, June 5, 2022.
The Minister of Interior, Rauf Aregbesola, disclosed this to State House correspondents, shortly after the over three-hour council meeting presided over by President Muhammadu Buhari at the Council Chambers of the State House, Abuja.