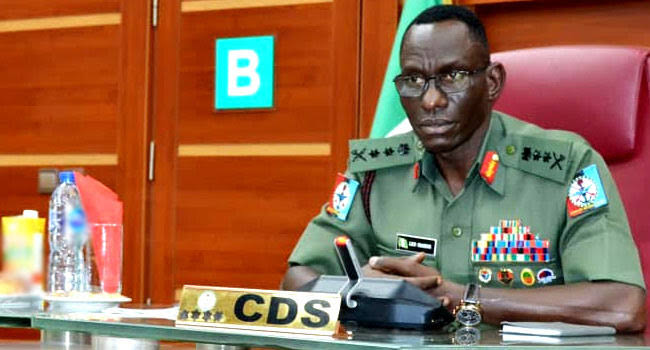 Security operatives have averted what could have been the most devastating incident in the history of Nigeria, General Lucky Irabor revealed on Sunday.

The Chief of Defence Staff made the disclosure during his appearance on a Channels Television’s special progamme tagged ‘Democracy Day: Giving Hope To Nigerians’.

He stated that the catastrophe was averted in Kano State the same week gunmen opened fire on worshippers at a Catholic church in Owo – a town in Ondo State.

General Irabor stressed that the security situation in Nigeria has improved in the last one year, adding that the incident in Owo does not take away that fact.

“Perhaps, you may not know that just only the same week of the Owo incident, in Kano, for example, given the intelligence available to security agencies, we were able to botch what would have been the most catastrophic incident within our country,” General Irabor said.

Recounting how the process went, he explained, “In that operation, we recovered Improvised Explosive Devices (IEDs) making materials.

“We recovered a large quantum of arms and ammunition and other materials which, of course, the criminals were intending to use in various parts of the country, including Abuja. That the Owo incident happened does not imply that improvements have not happened.

READ ALSO: Owo Catholic Church Massacre was message to South-West and we’ve got it – Soyinka

“Let me state that this is a process, and if you could take a look at the war stage in countries around the world, you will find incidents of violence and criminality in one way or the other.”

The incident sparked widespread condemnation with various individuals and groups calling on the government to ensure the assailants were arrested and brought to justice.

Amid controversy over who was responsible for the incident, the Federal Government linked the killings to the Islamic State’s West Africa Province (ISWAP).

For General Irabor, the attack is one of the similar crimes perpetrated by terrorists whom he said would be wiped out of the country.

He stressed that the security forces have been living up to their responsibility in securing the nation, although they are working towards ensuring a crime-free society.

The defence chief solicited the support of Nigerians and relevant stakeholders in tackling insecurity and urged them to focus on things that matter.

“I will say that a lot has happened; there’s been quite a lot of improvement in terms of the armed forces and other security agencies doing all that is necessary to bring peace to the various troubled regions of the country,” he averred.

“I can tell you that from last year till now, we have had quite a lot of improvement; from the North East to the North West, North Central, South South, South East and South West. Of, course, there still remains a long haul in terms of addressing the nuances that attend to insecurity in Nigeria.”