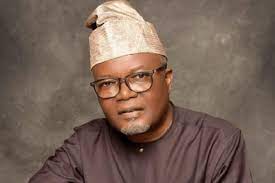 Flagbearer for the Peoples Democratic Party (PDP) in the forthcoming gubernatorial election in Ekiti State, Olabisi Kolawole, says he aims to prioritise security as a means to ensured increased Internally Generated Revenue (IGR).

Mr Kolawole stated this on Sunday at the Ekiti Governorship Debate which held in Ado Ekiti, the state capital.

“The most important thing is to have a stable security in Ekiti State, investors will not come if we are not able to secure lives and properties,” the PDP Candidate declared.

Adding, “I am prioritizing security to ensure that we are able to increase on our IGR.”

He further disclosed that his intension for wealth creation is to boost the economy through agriculture. According to him, if elected, his government will revive the agricultural settlements of the past with great stimulus inputs for farmers.

The PDP stalwart went on to reveal that he will encourage youths and women to go into farming on productive scale that would bring great commercial returns to the state’s coffers.

Kolawole who was the immediate past chairman of the PDP in Ekiti State, also stated that under his leadership, Ekiti will have a database which will ensure that the government knows all the businesses operating within the state.

This he said will ensure that taxes are levied on appropriate corporations and individuals in a bid to finance government activities and public services.

Speaking on the backlog of debts owed pensioners, Mr Kolawole assured the Ekiti people that within a period of four years the arrears will be defrayed.

He said the issue would be prioritized and experts will be brought in to see how installment payments can be made without injuring the psyche of the pensioners.