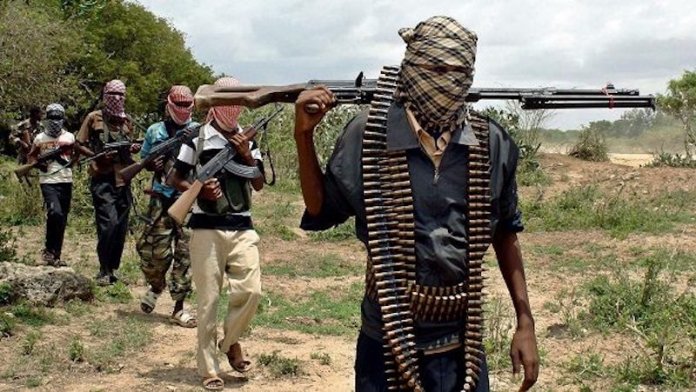 No fewer than 50 persons were on Saturday abducted by terrorists along Sokoto – Gusau road.

However, while 20 persons out of those abducted escaped into the bush with different degree of injuries, the terrorists succeeded in taking away 30 persons who are currently in captivity.

According to one Ibrahim Shehu who escaped during the incident, the abductees were wedding guests coming from Tambuwal local government of Sokoto State.

He explained that the terrorists intercepted the coaster bus and other vehicles conveying the people at Dogon Awo in Tureta local government area of Sokoto State.

He stated that the wedding guests abducted were indigenes of Zamfara state.

According to him, after intercepting the vehicles, the terrorists started shooting sporadically to see whether there would be response from security agencies, but there was none before they went away with the victims.

Meanwhile, the Coalition of Communication, Zamfara state chapter has given Zamfara State Government 48- hours to rescue those abducted.

The Union of Communication Zamfara State chapter gave ultimatum while briefing journalists in Gusau over the incident that happened to their members at Tureta, when they were returning from Sokoto to Gusau after a wedding fatiha of one of their colleagues in Sokoto State.

According to the Secretary of the Union, Ashiru Shuiabu the incident occurred when their bus developed a fault around Tureta in Sokoto State, they got a mechanic to fix the vehicle which they spent about 40 minutes before the vehicle was fixed.

He also explained that they had started moving when the suspected terrorists launched an attack on the bus between Tureta and Bakura area, abducted over 50 persons, while “20 persons escaped into the bush with different degree of injuries while the terrorists succeeded in taking away 30 persons who are currently in captivity.”

Shuiabu told journalists that the suspected terrorists made contact with them on Sunday, using the mobile phones of five of their victims to reach out to them, that their members were in their hands. However they did not demand for any ransom.

The Union wants the Zamfara State Government to immediately dialogue with the terrorists or direct the security agencies to ensure the safe release of 30 of their members who are in the terrorists’ enclave.

The 30 persons abducted last Saturday about 6pm along Sokoto-Gusau road were mostly youths from Zamfara State.

Efforts to get the Sokoto State Police command to confirm the incident were not successful as the Police Public Relations Officer Deputy superintendent of police (DSP) Sanusi Abubakar did not respond to calls or text messages sent to him.

Local residents disclosed that the attackers levelled the whole community as there was no building standing after their operation.

The people killed, according to eyewitness were all youths while the suspected herders left the children and women to escape unhurt.

“The attackers are Fulani herdsmen they stormed the community in a commando manner between 4am and 6am this morning (Sunday).

“They killed some of the youths in the village and spared the elderly, children and women as they allowed them to run away”, the local said.

Confirming the attack, the chairman of the local government, Mrs. Amina Audu said that nine corpses had so far been recovered from the scene.

She explained that though, three corpses had been brought to Okpoga, the local government headquarters, he revealed that six more were on the way.

“I had the report that the Fulani herders stormed Igama community between 4:00 am and 6:00am today (Sunday).

“As am talking to you now, am at the police station at Okpoga, three corpses have been brought from the community and people from the area just told me that they are on their way coming with another six corpses to be taken to mortuary.

“The attackers were said to have left women, children and elderly to run away but attacked and killed youths in the community. So also, they burnt down all the houses in the community,” he added.

The Police Public Relations Officer, SP Catherine Anene confirmed the attack but said that the command was yet to get details.

She said, “The incident is confirmed but the command is yet to receive details from officers who went to the scene.”