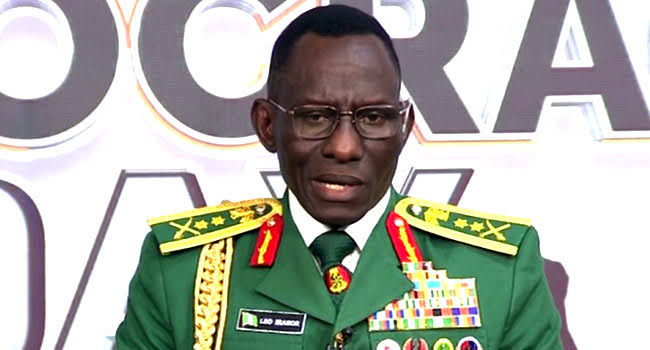 The Chief of Defence Staff (CDS), General Lucky Irabor, has advised persons vying for political offices to abide by the rules of the game and maintain decorum in the forthcoming elections.

Addressing journalists in Abuja at the bi-weekly media briefing of the Defence Media Operations, General Irabor warned that any attempt to circumvent the process would be dealt with according to the nation’s laws.

“They must allow peace reign in the country by navigating away from actions and comments that can undermine national security as they engage in political campaigns,” the CDS maintained.

General Irabor while reading out the riot act noted that “Nigeria belongs to us, now we are going into a season and everyone of us is desiring that we have a peaceful election and electioneering campaigns”.

He further stated that the peace desired within the electioneering period is not solely the responsibility of government.

The army chief urged Nigerians to join hands with the authorities to see that the forthcoming elections are civil and conflict-free.

General Irabor’s comments come a few days after the Chief of Defence Staff said citizens must trust the military and other security agencies for the war on insecurity to be more effective.

“It is for us to have an understanding that we can’t withhold information and expect miracles to happen,” he said.

“I’m a victim as well as any Nigerian that is on the street. We are all victims together. There’s no one who is on the other side. We are in it together. We are on the frontlines. Trust is not something we need to beg for.

“I will seek and crave the indulgence of all Nigerians to say that there has to be trust. Trust must exist and trust must be given in all respect, so that together we will achieve the state of peace that we so desire.”

The General noted that “a lot of improvements” have been recorded in securing the country in the past one year.

However, he admitted that the desired state of security is yet to be achieved, even as parts of the country continue to be subjected to repeated acts of violent crimes, including kidnapping and massacres.