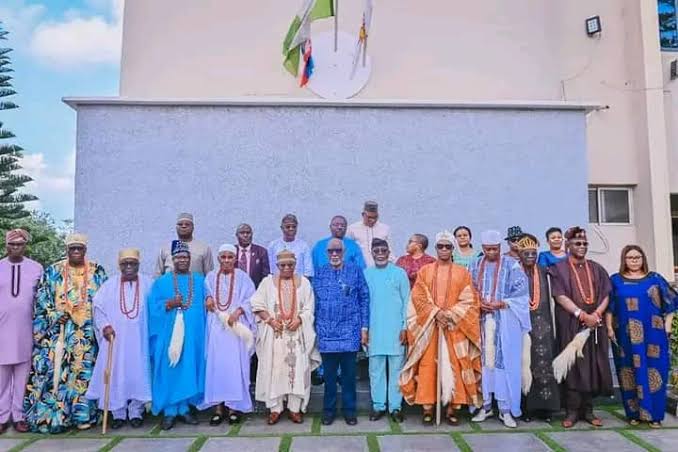 Ondo governor, Oluwarotimi Akeredolu has asked traditional rulers in the state to use hunters to rid the forests around them of criminals as part of efforts to curb crimes and criminality in the state.

Akeredolu gave the charge when he received the members of Ondo State Council of Obas led by their chairman and Deji of Akure kingdom, Oba Aladetoyinbo Aladelusi who were on a condolence visit over the Owo terror attack in Akure, the state capital on Wednesday.

The Governor, while appreciating the condolence visit, urged the traditional rulers to join hands with the government to fight crimes and criminals who have invaded Ondo forests.

He advised the monarchs to gather their hunters and rid the forests around them of criminals.

“I want to appreciate you. I read your visit to your brother, the Olowo of Owo. I thank you for the visit to Owo. If one has visited the church, one will weep. Those who came have one singular purpose. To kill and to maim.

“No doubt, we have never witnessed such horrendous thing in the Southwest before. We have come to Nigeria in peace, but they are bringing war to us. We are facing Fulani herdsmen which are destroying our farms. We also have Boko Haram who are also involved in banditry and killing. And now, what they called ISWAP. We will beef up our security.

“This is something so horrible. And it is not something that should be treated with kid gloves. We are for Nigeria. We are for restructuring, we are for state police. These marauders, we are going to pursue them. We need your help. We need your assistance. Make the forest around you safe,” the Governor said.

Earlier, the Deji of Akure, Oba Aladelusi described the attack as horrific, adding that it was a terrible situation that the monarchs couldn’t comprehend.

“What happened in Owo more than a week ago now, was a horrifying and terrible situation that we Obas’ couldn’t comprehend, because anything that happens to one of us, happens to all of us.

“We met and we said we can not continue like this. We know your efforts, despite the financial constraints, you are still recruiting more Amotekun. You take security as a priority in the state. We appreciate you. And we pray that future occurrence will never happen,” the Deji of Akure said.