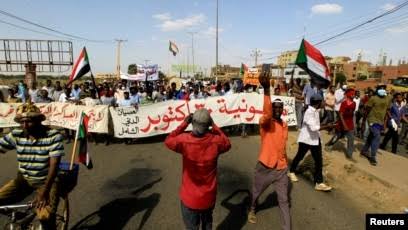 The protester, yet to be identified, died after taking “shots to the chest and abdomen” during rallies in Omdurman, twin city of the capital, Khartoum, said the pro-democracy Central Committee of Sudan Doctors.

The latest death brings to 102 the toll from a crackdown on anti-coup protests, which have taken place regularly since the October 25 putsch led by army chief Abdel Fattah al-Burhan, the committee said.

His coup upended a transition to civilian rule after the 2019 ouster of autocratic president Omar al-Bashir.

Hundreds took to the streets on Thursday in several parts of the Khartoum area to renew demands for civilian rule.

Sudan, one of the world’s poorest countries, has since the coup plunged into deepening unrest — near-weekly protests, rising prices, life-threatening food shortages, and ethnic clashes.

The United Nations, the African Union and regional bloc IGAD have been pushing to facilitate Sudanese-led talks to resolve the crisis.