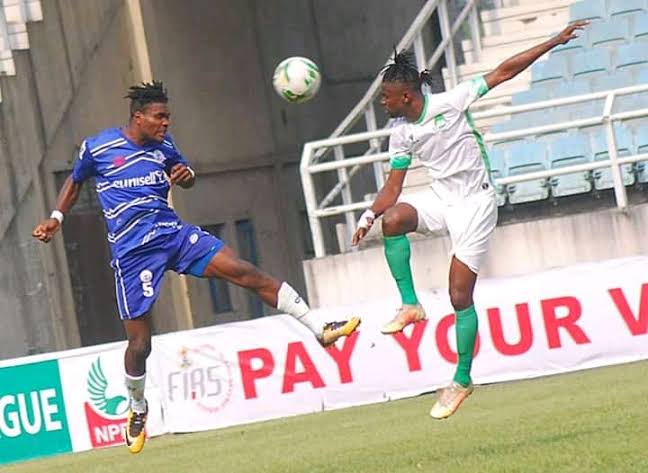 Plateau United’s slim chance of winning the Nigeria Professional Football League title went up in flames on Sunday as the Peace Boys for the very first time this season failed to win a home match in the NPFL.

Coach Fidelis Ilechukwu’s men despite having a 90th-minute penalty could only muster a 1-1 draw against Gombe United.

After a barren first half dominated by the hosts, Andrew Ikefe finally broke the deadlock in the 60th minute for Plateau United but the lead lasted only for 10 minutes as Ibrahim Yahaya pulled Gombe United with a 70th-minute equaliser.

Desperate for the maximum points, Plateau United piled pressure on the visitors and in the dying stages of the game, they were handed a lifeline with a 90th-minute penalty kick.

Unfortunately, Nenrot Silas, who chose to take the crucial kick, fired wide to the dismay of the fans that thronged the Jos Stadium despite the rain.

With the one point, Plateau United are still second on the log with 61 points from 34 matches while Rivers United have 71 points from the same number of games.

In Bauchi, another identical 1-1 scoreline was also recorded between Wikki Tourists and Shooting Stars.

However, in this case, it was the Oluyole Warriors that appeared to be coasting to victory after Opeoluwa Olufemi scored the opener in the 53rd minute but Idris Guda’s 90th-minute goal from the penalty spot earned Wiki Tourists a share of the spoils.

Sikiru Alimi gave the Sky Blue boys a first-half lead with his 18th-minute goal against his former Markudi-based club who are dangerously hovering around the relegation zone.

Francis Odinaka pulled Lobi Stars level just before the hour-mark but goals from Tolulope Ojo in the 64th minute and Samuel Anakwe 13 minutes after ensured Remo Stars secured all the three points.

The maximum points from Sunday’s game have taken Remo Stars back to the third spot on the NPFL log with 53 points, one more than fourth-placed Rangers who were held to a barren draw on Saturday.

Dakkada also beat Akwa United 3-1 in the ‘Uyo Derby’ at the Nest of Champions to keep up their survival hopes alive.

In the other games decided on Sunday, Kwara United piped Sunshine Stars 1-0 in Ilorin with Super Eagles coach Jose Peseiro in attendance.

Junior Lokosa scored the only goal of the game for the Afonja Warriors who remain in the hunt for a continental ticket.

Elsewhere, MFM put up a remarkable show; coming from behind to beat Enyimba 2-1 on Sunday.

Visitor Mbaoma had given the People’s Elephant the lead in the 52nd minute before Oladayo Alabi equalised from the penalty spot in the 64th minute and then Nduka David scored the winning goal in the 75th minute.

Despite the massive win, the Olukoya Boys remain rooted to the bottom of the NPFL log with 36 points from 34 games and would require to get more victories to stand the chance of beating the drop.