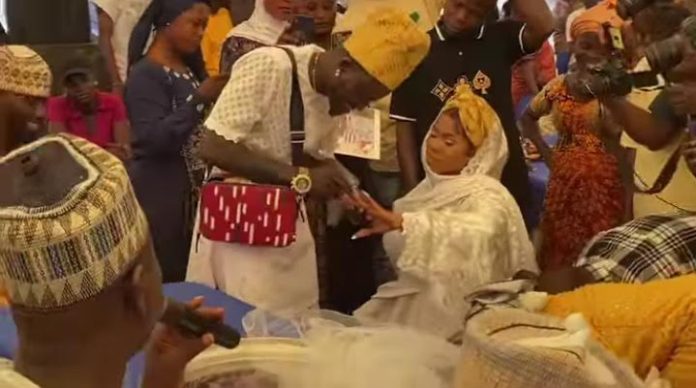 Portable, a promising musician, married his sweetheart, Feranmi, during their child’s naming ceremony, making it a double celebration.

Last week, the couple welcomed their second child together, and the naming ceremony was set for Tuesday (today).

In the presence of Islamic clergy, their relatives, and well-wishers, the couple exchanged wedding bands during the child’s baptism.

Portable slid the ring on his lover’s finger, and she reciprocated the gesture, as captured in a video by GoldMyne TV.
-Advertisement-

The musician showered naira notes on his bride and the mother of two of his children during the ring exchange.

The happy singer’sprayed’ his smiling bride with bundles of naira cash that he had taken from his suitcase. The day, however, was marred by tragedy when Portable’s aide collided with a bike rider in the singer’s automobile, killing the victim.

The musician and his partner announced in March that she was having a child for him, with Feranmi flaunting her baby belly. Iyanuoluwa, the singer’s kid with Feranmi, was born earlier this year.

The Zazoo Zeh singer disclosed in January that he has two sons from two different mothers.
Portable is now the father of three boys, thanks to the latest addition