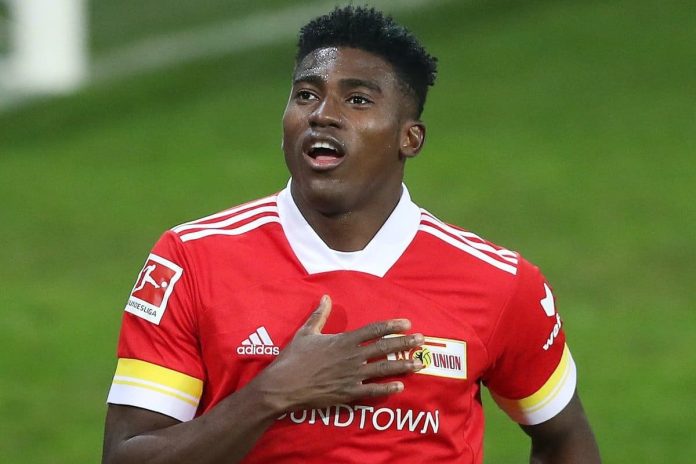 Nigerian forward Taiwo Awoniyi has bid farewell to his teammates in German side Union Berlin, on Wednesday.

It was reported on Wednesday that Awoniyi is close to signing for the newly promoted EPL side, Nottingham forest in a deal worth £17million.

According to Berlin-based German newspaper B.Z., Awoniyi said goodbye to his Union Berlin teammates in the dressing room on Wednesday morning and left with his suitcase.

The report added that the former Liverpool academy man left Alte Försterei at 09:05 am (Nigerian time) with a trolley case to his car, he got in and left the Union compound as his teammates were in the dressing room preparing for their first joint training session of the pre-season.

This comes after it was reported by Bild that the 24-year-old striker was absent at the pre-season testing conducted on the Unon Berlin players on Monday.

Awoniyi is expected to complete his move to Nottingham Forest this week, provided his release clause of 20 million euros is triggered and subject to a routine medical and agreeing personal terms.

The 24-year-old is set to make a return to the Premier League, a year after ending his six-year association with Liverpool without playing a single game due to a work permit obstacle.

He spent several seasons out on loan before moving permanently to Berlin last summer.

Awoniyi took the Bundesliga by storm during 2021/22; scoring 20 goals in all competitions and showcasing his undeniable talent.