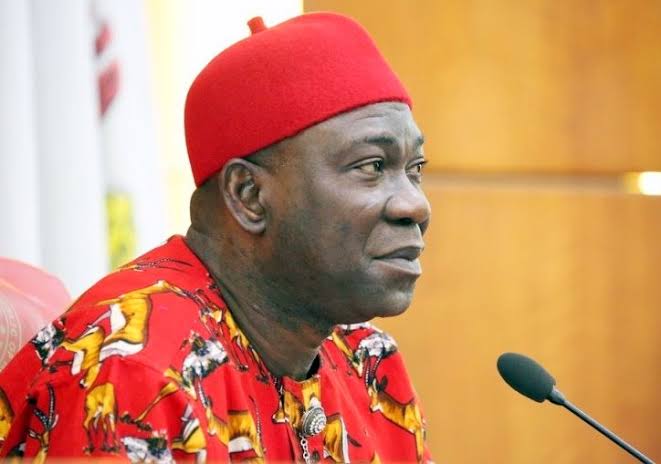 The Movement for the Actualization of the Sovereign State of Biafra welcomed the arrest and detention of Senator Ike Ekweremadu and his wife in London on suspicion of organ harvesting on Thursday.

Recall that Ike Ekweremadu and his wife, Beatrice Nwanneka Ekweremadu were arrested in the UK for plotting to bring in a child from Nigeria for organ harvesting.

The couple who have been denied bail was charged with conspiracy to arrange and facilitate the travel of another person with a view to exploitation, namely organ harvesting.

It was gathered that the alleged victim is a homeless 15-year-old boy who was brought to the UK by Mr and Mrs Ekweremadu.

Reacting, MASSOB said Ekweremadu is suffering from the sabotage campaign, he is leading against national Justice and Peter Obi emerging as the next president of Nigeria.

”We are ashamed of these sacrilegious and irresponsible acts of a so-called national leader. What kind of monetary inducement will make Ike Ekweremadu and his wife stoop so low for this criminality if not they are mentally slaved and subjected by the Hausa Fulani oligarchy as political errand boy and girl.

“Ike Ekweremadu and all his political gangs from South East involved in campaigns of thwarting the emerging of a competent president that will redeem the future of the Nigeria youths will experience similar shames like their bought master.”

The group reiterated that it shall continue in its competency, unshakable and uncompromised stand for Biafra actualization and restoration through the principles of non-violence.