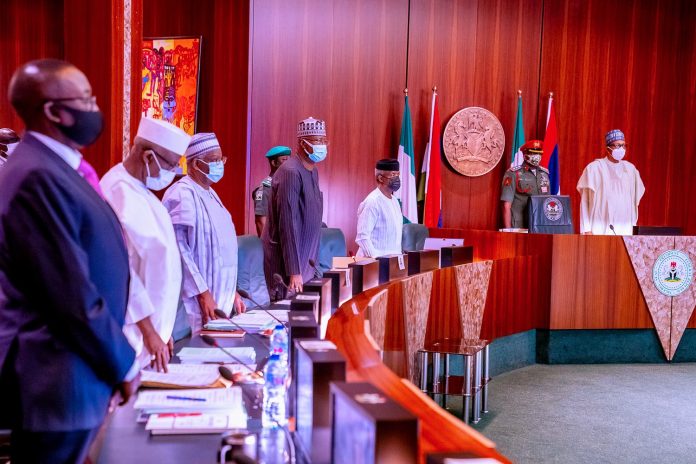 The Federal Executive Council (FEC) has approved a reimbursement of the sum of N18 billion to Yobe state government for five major roads which they undertook on behalf of the federal government.

The council gave the approval on Wednesday at a meeting presided over by President Muhammadu Buhari.

FEC said about N477 billion has been refunded in the first tranche of reimbursement to many states.

“The last memo by the honorable minister of works and housing is memo seeking council’s approval for the reimbursement of the funds that were certified recommended for a refund for the Yobe State government.

“I think it’s important to say that well, it is true that we are just reporting this particular memo, which is a refund being sought by Yobe government. The Yobe government is asking for the sum of N18,663,843,009 as reimbursement for five federal roads, which they rehabilitated or constructed.

“A Committee was set up to inspect the claim and were actually found to be true. They were reviewed, and then out of the N20 billion they asked for, they certified N18 billion as refund due to Yobe state for undertaking the construction and rehabilitation of these federal roads on behalf of the federal government.”

Mohammed said this is not the first time the federal government has reimbursed states for jobs done contrary to claims by some opposition states.

He said since 2015 the federal government made refunds to about 24 states.

“And I want to put on record here that but for the benevolence of this administration many states would have sunk under.

“You remember that by the time we came in about 27 states were unable to pay salaries, it took this federal government to really bail them out so that they could pay salaries and arrears. And when the price of crude crashed, this same government gave each state what is called a bailout. And some of the states today that complain that they have never benefited from the federal government especially the PDP states, are the ones that have taken the lion’s share of this reimbursement.

“Second tranche were the last trench and I think if I remember, I think Yobe and two other states were supposed to be in the next batch. We have Yobe which was gotten to today, N18 billion for works which they undertook on behalf of the federal government.”