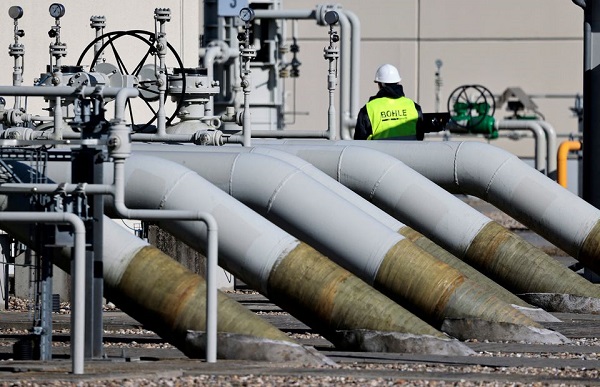 The heightened alert gives the government the option of enacting legislation to allow energy companies to pass on cost increases to homes and businesses, while some coal-fired power plants could also be reactivated to help minimise gas consumption.

The third and highest “emergency” level would involve state control over distribution.

Mr Habeck called on Germans on Thursday to reduce their gas consumption in a national effort to conserve energy for the winter.

“We are in an economic confrontation with Russia,” he told reporters.

He warned on Wednesday that Europe’s biggest economy should brace itself for a further reduction in Russian gas flows after Moscow last week slashed deliveries on its main pipeline to Europe.

Germany, which relies on Russia for more than a third of its gas supplies, enacted the initial “early warning” phase at the end of March, when the Kremlin’s demands for payment in roubles prompted Germany to brace itself for a potential cut-off in supply.

Several European countries have outlined a series of measures to withstand a supply crisis to tackle worries about winter energy shortages and an inflation spike that could test Europe’s resolve to maintain sanctions on Russia.

Mr Habeck, who is also the vice-chancellor in the ruling coalition, has said Russia’s move to cut gas deliveries through the Nord Stream pipeline by about 60 per cent was politically motivated and aimed at unsettling the markets.

The government’s latest move comes as Germany rushes to fill up gas storage facilities, which are currently around 58 per cent full. Energy companies have been building stocks to try to reach a government-mandated target of 90 per cent capacity by November to help see the nation through the winter.

Germany’s network regulator, known as BNetzA, would implement rationing if the government triggers the emergency level. The Bonn-based agency has said leisure venues would likely see supply cuts, while consumers and critical public services such as hospitals would be protected.

Gas is a crucial part of Germany’s energy mix and more difficult to replace than Russian coal and oil, which are being phased out by the end of the year. Some 15 per cent of Germany’s electricity is generated from gas, which is also critical for heating homes and for industrial processes in the chemicals, pharmaceuticals and metals sectors.

Germany has taken steps to secure supplies, including taking control of a local Gazprom subsidiary, which was renamed Securing Energy for Europe GmbH. The country is also building infrastructure to import liquefied natural gas from the United States and other suppliers.