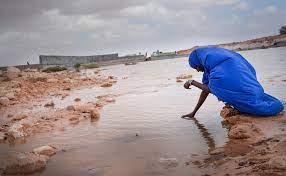 One of Somalia’s main rivers, the Shabelle, is running dry and affecting people who depend on it for their livelihoods amid a continued drought.

The state-owned Somali National TV said the river had “dried up” and it could exacerbate the drought and further increase food insecurity.

The Shabelle River flows into southern Somalia from the highlands of neighbouring Ethiopia.

It is second biggest river in Somalia and is a major source of water for people in southern and central regions.

Agricultural activities in the country have been affected by a fourth failed rainy season.

More than five million people are reportedly at risk of famine as a result of a severe drought affecting the country.