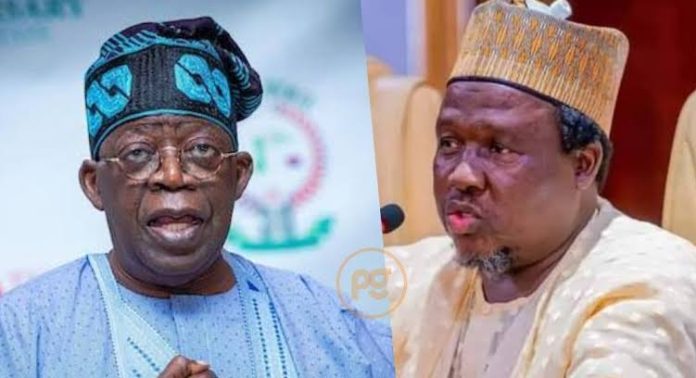 While the entire country is calling on the presidential standard-bearer of the All Progressives Congress, Bola Tinubu to make public his primary and secondary school certificates, his dummy running mate, Kabir Ibrahim Masari, has informed the Independent National Electoral Commission his school certificates were also missing.

A sworn affidavit for the loss of some original documents submitted to the electoral commission by Mr Masari and seen by Peoples Gazette, showed that the APC vice presidential candidate had misplaced vital documents including C of O of one plot KT 17522 in Katsina state, his Grade II certificate from Katsina Teachers College and his primary school certificate.

“That sometimes in January 2021, while on transit within Wuse Area, FCT-Abuja, I discovered that my original Certificate of Occupancy (C of O) of Plot, No KT 17522, GRA Katsina, Katsina State; Certificate of Kaduna State Development Centre from 1994 – 1995; Grade II Certificate from Katsina Teachers’ College (KTC) from 1978 – 1983 and First Leaving School Certificate issued by Masari Primary, Katsina State, from 1972 – 1978, got lost,” partly stated the affidavit sworn by Mr Masari at the Supreme Court in July 2021 and submitted to INEC on June 17, 2022.

“That all efforts made to trace the documents proved abortive hence this affidavit,” the affidavit added.

The electoral law mandates candidates to submit their personal credentials that will be published for public scrutiny ahead of elections.

Meanwhile, Mr Tinubu had on Saturday insinuated Mr Masari was only a dummy running mate after he admitted that he was still searching for a suitable vice-presidential candidate.

His statement lent credence to claims that the submission of Mr Masari’s name to the electoral office was only a stopgap to circumvent the INEC deadline for the 2023 elections.

Mr Tinubu and Mr Masari being Muslims may offset the religious balance and representation known with the nation’s highest office.