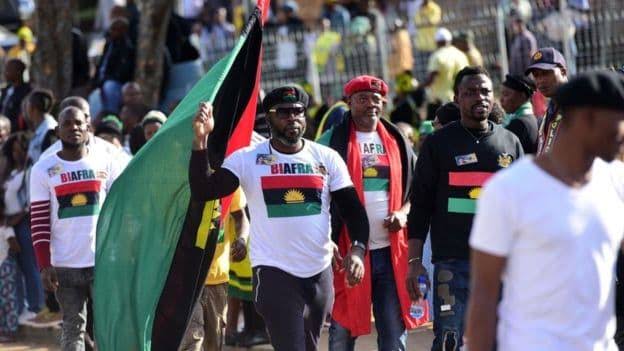 The Indigenous People of Biafra, IPOB, on Thursday, reacted to the invasion of the correctional facility in the Kuje area of Abuja by terrorists.

IPOB alleged that the attack was a plot by terrorists to eliminate members of the group incarcerated in the facility.

Gunmen believed to be Boko Haram members had invaded the Kuje prison on Tuesday with explosives.

The terrorists had released all their members incarcerated in the facility.

Reacting to the attack, IPOB’s spokesman, Emma Powerful, warned that nothing must happen to members of the group incarcerated at the facility.

Powerful warned that IPOB would not take it easy with the Nigerian Government if anything happens to members of the group incarcerated in the Kuje facility.

A statement by Powerful reads partly: “We the global family of the Indigenous People of Biafra (IPOB) under our great leader Mazi Nnamdi Kanu wish to draw the world’s attention to the Nigeria Government and its security agencies, especially the Army and DSS agents’ instruction to the bandits rampaging the North to attack the Kuje correctional centre in Abuja.

“The Nigeria security agencies, especially the military and DSS agents in a covert action detailing a systematic strategy to eliminate IPOB members detained in Kuje prison and yesterday’s attack has confirmed our earlier intel.

“We want to let the world know that IPOB members were profiled and detained in Kuje prison yards for simply being persons indigenous to Biafra and of Igbo race.

“We have their details and want them alive because if anything untoward happens to our comrades who are detained in Kuje, IPOB will never take it easy with Nigeria Government and her security agencies.

“It is high time to release these innocent folks who were detained illegally and unjustly, Nigeria cannot continue to detain them indefinitely while allowing terrorists and bandits to come and slaughter them under disguised arrangements by the Buhari-Fulani administration.”