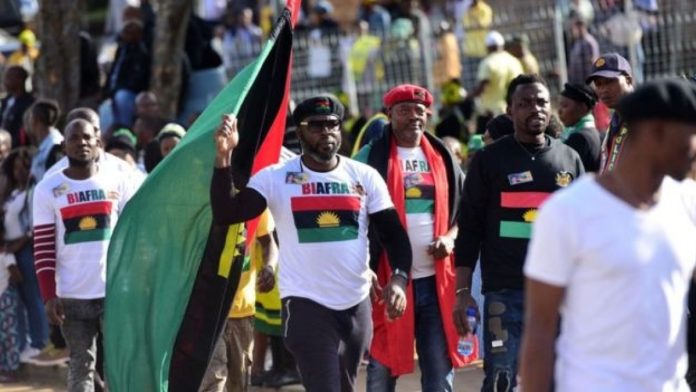 The Indigenous People of Biafra has urged the National Assembly not to attend to the waterways bill reportedly presented by President Muhammadu Buhari.

The group said the bill would be a national disaster if passed into law.

In a statement by its Media and Publicity Secretary, Emma Powerful, IPOB described the bill as Fulani agenda, vowing to resist it with full force.

It alleged that the plot by the “impostor” was to secure lands and waterways for bandits and terrorists before leaving office.

The statement reads in part: “We wish to call for caution once again over the waterways secret bill sent to the Nigerian National Assembly by Buhari and his Fulani kinsmen.

“We wish to unequivocally state our stand once again to Buhari, the national assembly, Fulani and the entire world that Buhari cannot use crooked means to hand over our waterways in Biafraland to Fulani from Futajalon having passed through mighty expanse of empty land in the North, we never for once in our lifetime ventured into encroachment nor occupation of any inch or parcel of land not belonging to us despite our limited land space.

“The national assembly must save Fulani because this bill sent by Buhari will consume so many of them if they venture into any river or waterway situated in Biafraland.

“The national assembly must stop that bill because it will only end up in the dustbin of history as one of the useless non-implementable acts of the Nigerian National Assembly. This deliberate attempt to steal our ancestral land and waterways by trick and through the back door is dead on arrival because it will be resisted with everything that we have at our disposal. Such impunity and selfishness considering the vast expanse of land available to fulani in Northern Nigeria.

“Biafrans would not shy away from protecting our heritage. We are waiting for them and they would learn an unforgettable lessons the hard way.

“This old strategy that Buhari and his kinsmen are adopting to re-introduce RUGA is not lost on us Biafrans or lost on any other Nation imprisoned in the hell of a country that is worth its name. Why must Fulanis’ terrorists and their cows be forced on us, to cohabit with us in our communities, those with whom we never share a single value system?

“Let us tell you, Ruga can never sail through for the sake of Umuchineke and no amount of their efforts would succeed in bringing RUGA evil project to fruition in our land.

“IPOB will never accept such permutations no matter the inducement they use to deceive the gullible, the compromised, the spineless good for nothing politicians and slaves of the uncircumcised Fulanis in Biafraland.

“We reject that in totality, we knew that the impostor wants to secure lands and waterways for Fulani bandits and terrorists before he leaves office in less than one year, let him look elsewhere.”