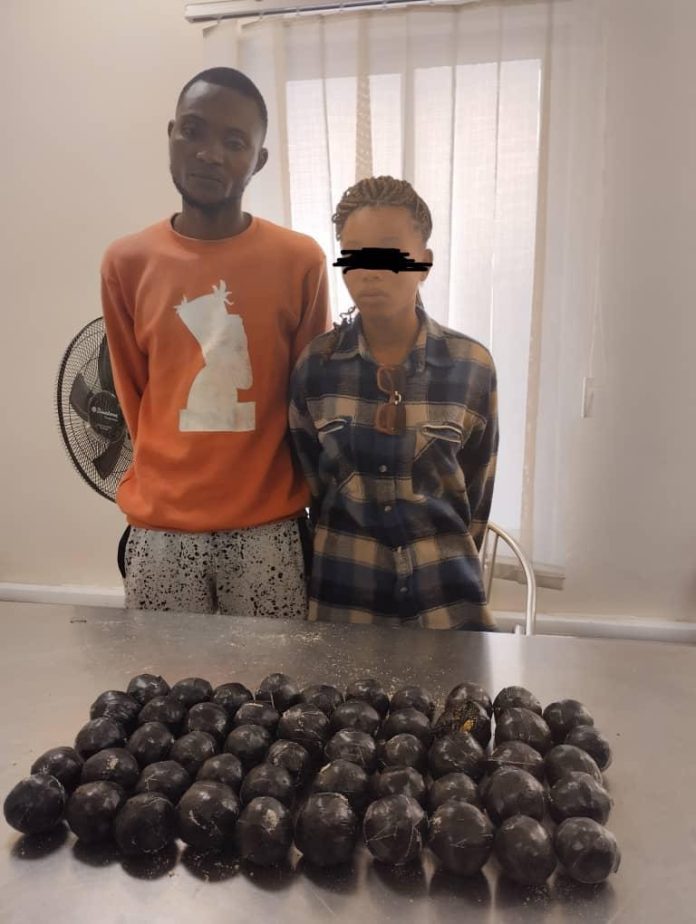 An attempt by a human trafficker, Mathew Bassey, to export illicit drugs to Dubai, United Arab Emirate, by planting them in the luggage of an orphan, Ms Peter Gift Eno, recruited for a fictitious job in the Arab nation was foiled by operatives of the National Drug Law Enforcement Agency, at the Murtala Muhammed International Airport, Ikeja Lagos. 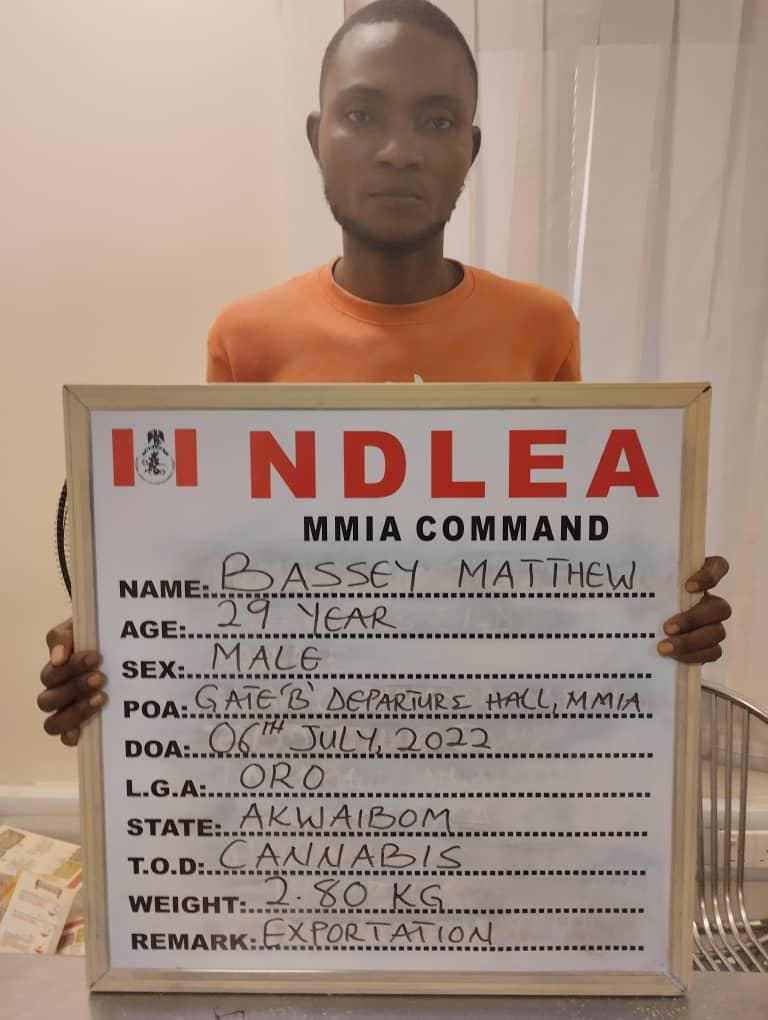 According to Femi Babafemi, the NDLEA spokesperson, Mr Bassey, a 29-year-old indigene of Oron LGA, Akwa Ibom state was arrested on Wednesday 6th July following the interception of Eno at the departure hall of the Lagos airport.

Babafemi said that when Eno’s luggage was searched, 50 parcels of cannabis (2.80kg) concealed in food items were discovered while there were discrepancies between the age she declared and the date of birth on her international passport.

“Further interview reveals that the human trafficker who recruited and brought her to the airport, Mathew Bassey, was still lurking around the airport, waiting for her departure.

“But he was promptly tracked and arrested.

“Investigations showed that the victim who hails from the same Oron LGA of Akwa Ibom State like Bassey recently lost her mother and as a result made it easy for Bassey to recruit her with the promise of securing her a job in Dubai, UAE.

“It was further discovered that the recruiter leveraged on the victim’s naivety and planted drugs in her bag for onward delivery to his contact in Dubai”, Babafemi said.

In a related development, another drug trafficker, Aloysius Ajuruchukwu Onyekwe (a.k.a Kelvin) was intercepted on his way to Algeria through Sokoto state with 47 wraps of cocaine ingested in his stomach.

Onyekwe was arrested by NDLEA operatives in Ibadan, Oyo state following intelligence shared by the Department of State Security.

The 26-year-old, Onyekwe, who hails from Owerri West LGA, Imo state was arrested on Sunday 3rd July at Ojo park Ibadan where he went to board a vehicle en route Sokoto to Algeria.

“He was travelling with an 18-year-old lady, Blessing Nwoke. The father of a 10-month-old child who passed out the 47 pellets of cocaine in five excretions confessed that he began his journey to Algeria from Cele area of Okota, Lagos where he ingested the illicit drug, weighing 1.1kg”, Babafemi disclosed.

Also in Oyo state, no fewer than 1,900 tablets of Tramadol 225mg were seized from a drug dealer, Mustapha Ijabula. 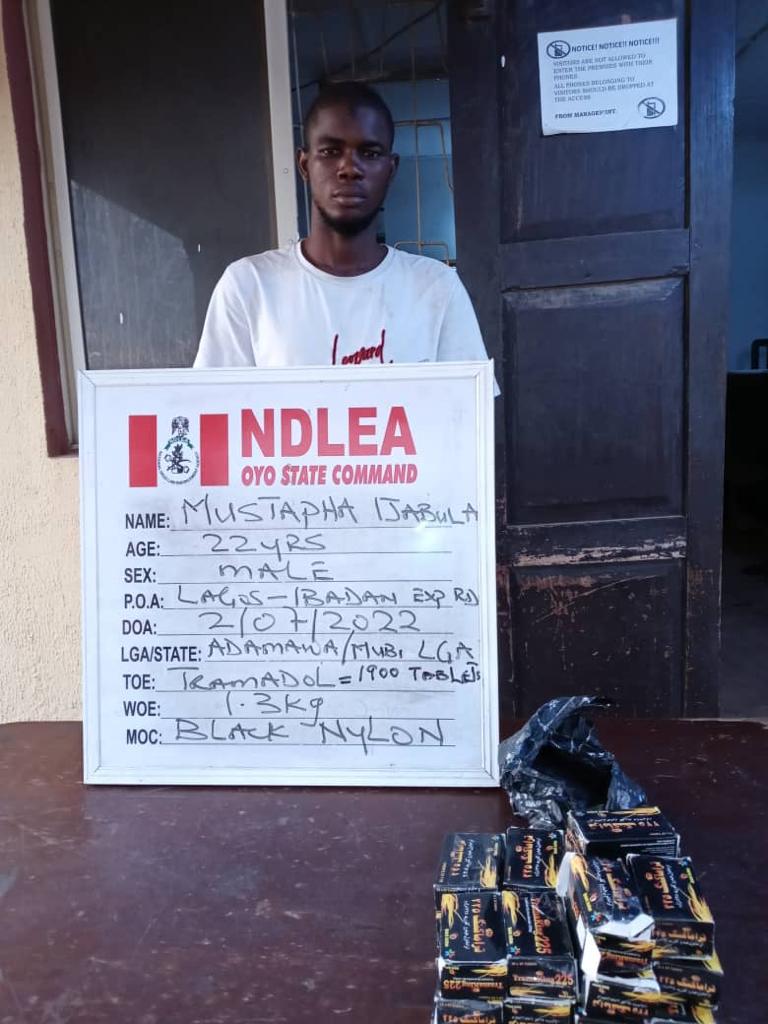 Ijabula, a 22-year-old man from Mubi area of Adamawa state, was arrested in a Yola, Adamawa-bound commercial vehicle after their bus stopped for a routine search along the Lagos-Ibadan expressway.

Dassi was nabbed by officers of the Marine Unit of the Agency when a commercial boat he boarded was intercepted and searched on his way to Cameroon.

“The suspect concealed the recovered drugs inside an indomie noodles cartoon,” Babafemi said.

In the same vein, a wanted drug dealer, Uduak Edidiong Samuel, 29, was arrested on Tuesday 5th July, after attending a court proceeding where his wife was undergoing trial for another drug case. 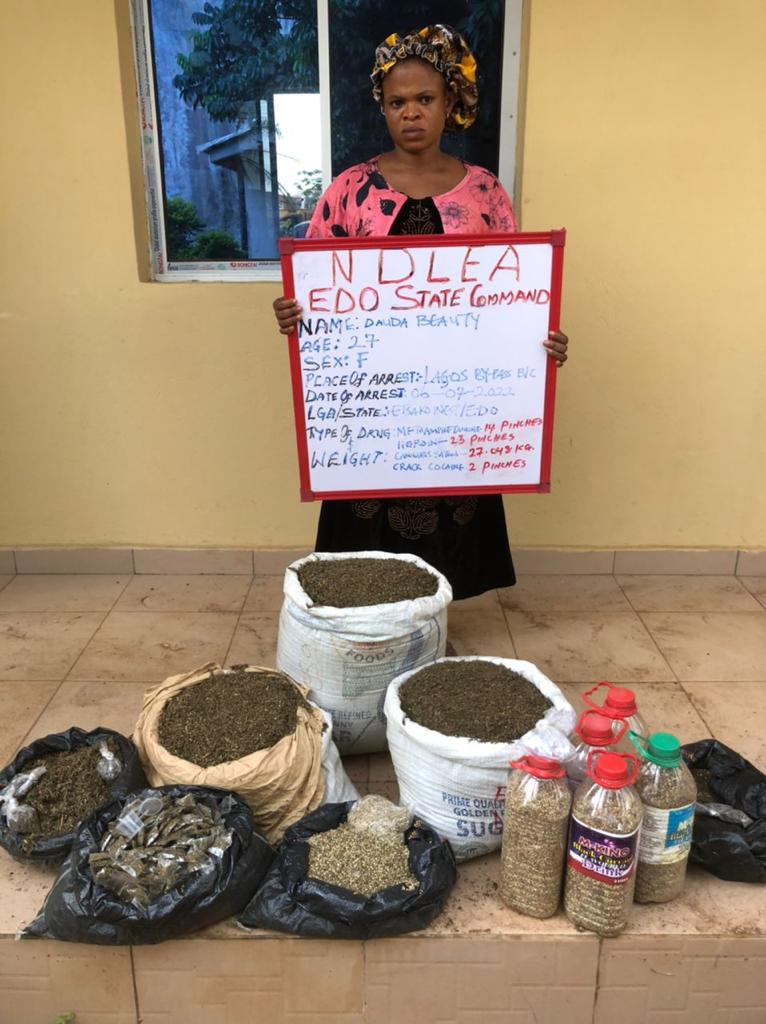 The suspect had abandoned a cannabis sativa exhibit weighing 9kg when his house was searched on 27th June and has been on the run since then.

During his arrest on Tuesday, Uduak was still found in possession of a wrap of skunk.

“In Edo state, a notorious drug dealer Beauty Dauda, 27, has been arrested with various quantities of Meth, heroin, cannabis and crack cocaine in a densely populated slum along Lagos bypass, Benin City.

“She was arrested on Wednesday 6th July after NDLEA operatives were able to break through the ring of protection often provided to her by hoodlums and touts in the area”, the statement read.