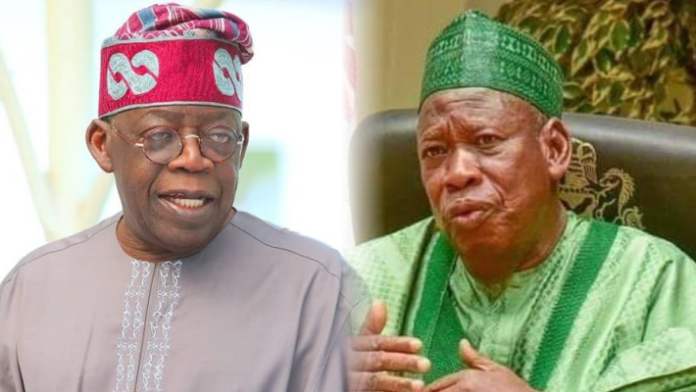 Governor Umar Abdullahi Ganduje of Kano State has stated that the choice of Kashim Shettima, a two-term Governor of Borno State as Bola Tinubu’s running mate, is a quality assurance for the All Progressives Congress, APC, victory in the forthcoming 2023 general elections.

Ganduje, who was also in the front burner for the VP contest, congratulated Senator Shettima over his nomination as vice presidential candidate of the APC.

The governor, in a statement issued by the commissioner for information, Malam Muhammad Garba, described Shettima as highly quick-witted and prepared for the office of the Vice President.

Ganduje noted that during the pre-presidential primary campaign, he shared common experience with Shettima who played a major role and brought to fore his qualification, competence and exposure.

He expressed confidence that the representative of Borno Central Senatorial District and a former two-term governor of Borno State is a good choice capable of working with the presidential candidate to take Nigeria to greater heights.

The Governor commended the APC flagbearer, Asiwaju Bola Ahmad Tinubu for making a choice in Shettima, and described the combination as an assurance for the success of the party at the polls.

Ganduje then called on Nigerians, particularly members of the APC, to rally round its presidential candidate and his running mate to ensure their success.