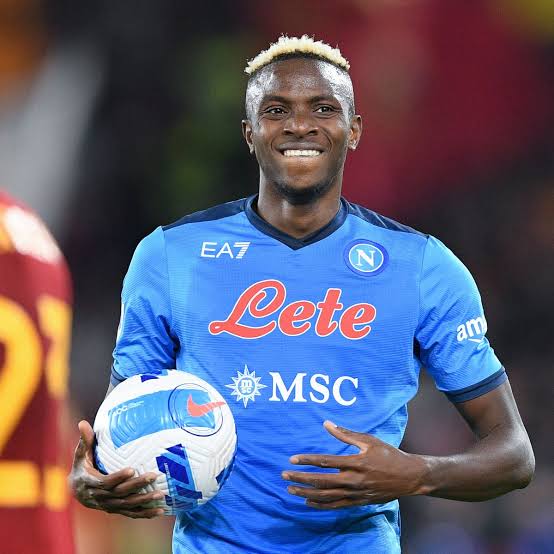 The former Lille star has three years left in his contract at the Stadio Maradona, but following a decent campaign during which he scored 14 Serie A and four Europa League goals, a number of European clubs have been linked with securing his services in the summer.

Manchester United, Arsenal and Bayern Munich are reportedly interested in the 23-year-old and Napoli director Cristiano Giuntoli has provided the latest updates regarding the striker.
The Partenopei don’t want to sell Osimhen but are aware of the interest from many clubs in Europe.
“Everyone knows we have great expectations and he still has three years left in his contract. We’ve received many calls, but not offers,” Giuntoli said at a press conference.

Despite speculations linking Osimhen with a move away from the club, Napoli manager Luciano Spalletti only talks about the areas he believes the Nigerian can improve on when the new season begins.

“He still needs to learn something about movement at times. We did not use much for his great potential on headshots; this year, we will try to exploit him more.”

Napoli rejected a €100m bid from Newcastle in January and the player is reportedly unwilling to sign with a club that doesn’t play Champions League football next season.

Nevertheless, an offer from one of the big sides in England could make him change his mind.
Bayern Munich are also considering the striker as a replacement for Robert Lewandowski, who wants to move to Barcelona.