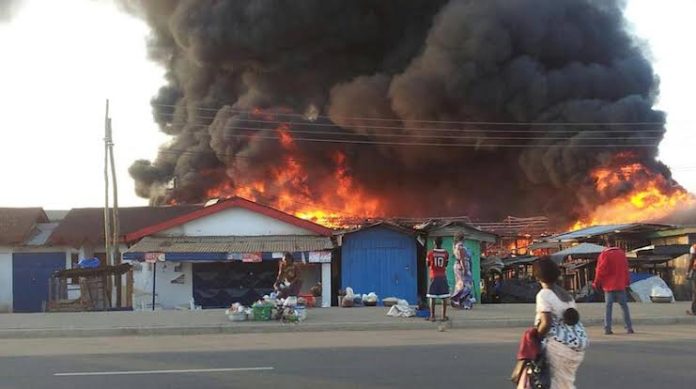 A section of the popular Bodija market in Ibadan, Oyo State capital, has been gutted by fire.

The affected areas are located at Ori-Igi, Daleko, and Iso Ẹlẹwà, inside the popular market.

One of the affected traders, Ganiyu Asimiyu, said the fire came from an unknown source as early as 3:00 am on Monday.

Another affected trader Isiaka Kafilat said she lost goods worth about N2 million in the incident.

The swift intervention of the Oyo state fire service was able to stop the fire from spreading to other parts of the market.

Speaking to newsmen, the Director of Operations, Oyo State Fire Service, Ismail Adeleke, said that although the service got the distress call very late, operatives were able to put off the inferno.

”We received a call at 5:35 am and we moved to the market and put out the fire immediately,” he said.

“There was no loss of life and nobody was injured in the incident. We were informed late. We didn’t receive any call from the people in the market, it was a policeman in Yemetu area that called and we responded swiftly.”

Adeleke advised residents of the state to always put safety measures in place to prevent fire outbreaks and to always call fire service immediately if there is an outbreak.

This is coming six months after traders lost goods worth millions of naira in a fire incident at Agbeni Market, also in Ibadan.