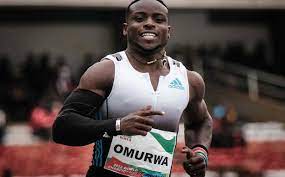 Africa’s fastest man Ferdinand Omanyala said Thursday he has given up on competing at the World Athletics Championships in the United States because of a delay in getting a visa.

The 26-year-old Kenyan sprinter had been hoping to shine in the 100m at the championships that open on Friday in Eugene, Oregon.

“I have given up my trip to Oregon. Even if I am given a visa today it’s too late,” a bitterly disappointed Omanyala told AFP.

He had been due to compete in the 100m heats on Friday, but lost a race against time to secure his US visa and travel to Oregon — a trip of about 24 hours or more.

“It would mean booking flights which can only be possible at night and the race is on tomorrow. It’s not possible,” he said.

“There’s nothing I can do. It’s been my longest day of waiting and I don’t like waiting.”

The Kenyan teams had been due to leave for the United States in two batches on Monday and Tuesday, but several members including Omanyala did not receive visas.

There was no immediate comment from Athletics Kenya, and the fate of other stranded team members was not immediately clear.

Omanyala is the third-quickest man in the world this season behind Americans Fred Kerley and Trayvon Bromell, setting a time of 9:85 in May.

In September last year, he clinched the African record of 9:77, making him the ninth-fastest man ever, behind four Americans and three Jamaicans.

“I have accepted the situation and will now focus on the Commonwealth Games in Birmingham,” said Omanyala.

The Commonwealth Games open in the English city on July 28 and run until August 8.

In the meantime, he said: “I will sit back and watch the race in Oregon and enjoy it.

“I hope I will be better when the next world championship comes round in Budapest in 2023.”

Omanyala had said in a recent interview with AFP that he had set his sights on at least reaching the final of the 100m in Oregon, targeting a time of 9:6.

If he had made the podium there, it would have been an historic first for an African runner.

Namibia’s Frankie Fredericks twice won Olympic silver in the 100m in the 1990s, but his one gold and three silvers in the World Championships were all over 200m.

– ‘Want to leave a legacy’ –
The young athlete and his coach Duncan Ayiemba have been mapping out ways to make sprinting more popular in Kenya, the East African country where the long-distance runner is king.

He was able to represent Kenya in Tokyo after Athletics Kenya relaxed a decision to prohibit any banned athletes from taking part in international competitions.

He had been suspended for 14 months in 2017 by the Anti-Doping Agency of Kenya after testing positive for a banned substance.

“It was a hard 14 months but life has to move on,” Omanyala said in the AFP interview.

The young athlete from western Kenya said he hoped to be a role model for other aspiring sprinters both at home and across Africa.

“I believe I opened the way for so many people coming behind me,” he said. “One of the things that I wanted to do is to leave a legacy. I want to leave an industry of sprint in Kenya.”