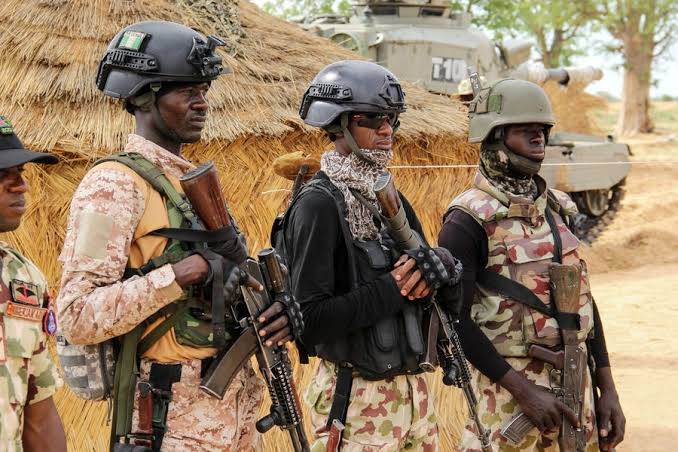 Scores of terrorists, among hundreds who invaded a military camp, have been killed on Monday in Sarkin Pawa, the headquarters of Munya Local Government Area of Niger State.

This was made known in a statement signed by the Spokesperson of the Coalition of Shiroro Associations, Salis Sabo.

Sabo said the terrorists had attacked the military camp in their hundreds in the early hours of Monday morning but were dislodged by the military men.

“In the wee hours of today at exactly 2:15 am, terrorists in an attempt to lay ambush on our security men invaded the military camp, but unfortunately for the terrorists, the gallant soldiers were on alert even at the late hours of the night.

“The terrorists came in hundreds trying to dislodge the military base. The military engaged them in a gun duel which lasted for about two hours until the military called for reinforcement and successfully neutralised them.

“It took the military less than 30 minutes to arrive Sarkin Pawa from Minna in response to the distress call for reinforcement. The statement added.

Sabo also said that there was no casualty on the side of the military.

“By the report at our disposal, there was no casualty recorded on the side of the military but there is strong indication that some terrorists were gunned down, although the number is yet to be ascertained.

When contacted, the Police Public Relations Officer, DSP Abiodun Wasiu, said he wasn’t in the position to speak on the matter but directed journalists to the Commissioner for Internal Security, Emmanuel Umar, who didn’t pick up calls put across to him.