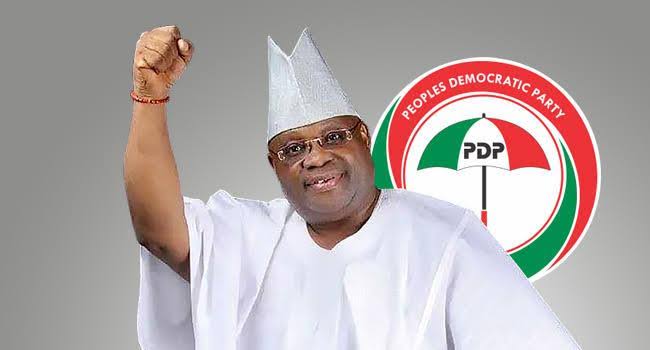 The Osun State Governor-Elect, Senator Ademola Adeleke, has stated that the fallout between the state’s incumbent governor, Gboyega Oyetola, and the Minister of Interior, Rauf Aregbesola, paved the way for his victory in the Saturday poll.

On Sunday, the Independent National Electoral Commission declared Senator Ademola Adeleke of the Peoples Democratic Party the winner of Saturday’s governorship election in the state.

According to the Returning Officer for the election and Vice Chancellor of the University of Lagos, Prof Oluwatoyin Ogundipe, Adeleke got a total of 403,371 votes to beat the incumbent governor who polled 375,027 votes in the keenly contested race.

Adeleke had won the Osun State elections in 2018 against Oyetola, but following a run-off, Oyetola was declared the winner.

Before his electoral loss, Oyetola had in 2018 defeated Adeleke after a run-off, with the support of his predecessor, Aregbesola, and former Lagos state governor and now APC presidential candidate, Bola Tinubu.

Shortly after winning the election, Oyetola, who was the Chief of Staff to Aregbesola for eight years, parted ways with the interior affairs minister and his loyalists. They alleged that the governor abandoned his predecessor’s programmes.

In the Channels Television interview published on Tuesday, Adeleke noted that he was delighted when he heard that there was a fallout between Oyetola and Aregbesola.

“These were the people that colluded that time. They were together. Kolapo Alimi (Aregbesola’s ex-associate) told me the truth. They robbed me. Even the president said it when he came over here; that they won the (2018) election through remote control,” Adeleke said.

He added, “They fell out, and that was towards my advantage. It has paved the way for me to victory too.”