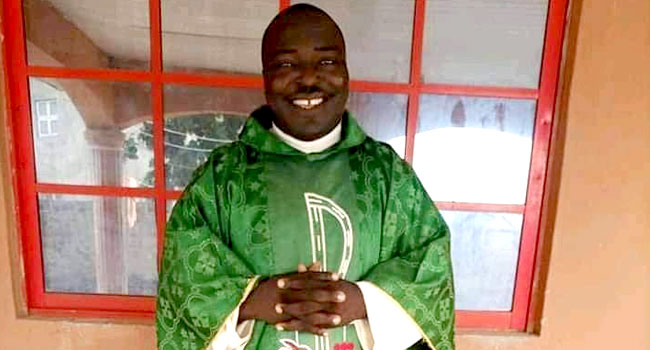 President Muhammadu Buhari has condemned the murder of a Catholic priest, Reverend Father John Cheitnum of the Kafanchan Catholic Diocese, four days after he was seized by gunmen in Kaduna State.

“I am deeply disturbed by the murder of this revered religious figure by outlaws who seem to be bent on creating chaos and disorder in the country,” he said in a statement on Wednesday by his spokesman Garba Shehu in Abuja.

“The persistent attack on innocent people, including religious figures, by gunmen is a matter of grave concern for this administration because security is one of the major issues of our campaign promises.”

Bandits have carried out renewed attacks in recent times in parts of Kaduna and some other states where clergymen, especially Catholic priests have been targets.

Among several of such attacks was the abduction of Reverend Father John Cheitnum and Reverend Father Donatus Cleopas last Friday in Jere Local Government Area (LGA) of Kaduna State.

Their abduction came barely two weeks after another priest, Reverend Father Emmanuel Silas, was kidnapped by bandits from the parish rectory of Saint Charles Catholic Church, Zamina in Kauru LGA.

‘No Rest’
Days after their kidnap, the Chancellor of Kafanchan Catholic Diocese, Reverend Father Emmanuel Okolo, said the decomposing body of Cheitnum was discovered on Tuesday.

Reverend Father Cleopas, on his part, was said to have been released by the bandits after an undisclosed amount of money was paid to them as ransom.

Despite the recent trend of the activities of these criminals, President Buhari assured Nigerians that the government would continue to ensure the safety of the people.

“Let me reassure Nigerians that my commitment to this issue is as firm as ever; I have always made it a duty to regularly summon security chiefs to discuss these challenges and the way forward,” he said. “I’m not allowing the security chiefs to rest unless and until we find a very effective solution to this disturbing security situation.

“The security of all Nigerians remains our major priority and I assure Nigerians that we are determined to crush these enemies of humanity with all the resources at our disposal.”

The President also extended his condolences to the family of the slain priest and the Christian Association of Nigeria leadership in Kaduna State over the death of Cheitnum.